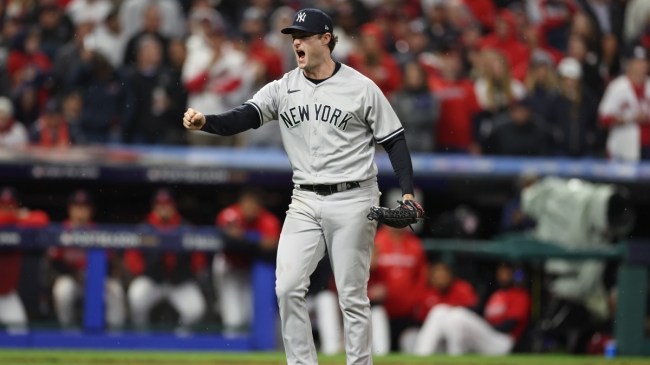 Gerrit Cole’s time as a Yankee has been up and down. At times he has looked like the best pitcher on the planet. After all, that’s what the Yankees paid for when they signed him to a $324,000,000 contract before the 2020 season. He was the Cy Young runner-up last year. But, he imploded in the wild card game against the rival Red Sox and didn’t get out of the third inning in an eventual loss that ended the New York season. the Righty pitched to an above-average 3.50 ERA this season, but he was paid to come in and pitch well in the biggest games.

Facing elimination, He was magnificent. He spun a gem, going 7 innings, allowing 6 hits and striking out 8, with 2 earned runs against him.

Even though things did get shaky a few times, especially after this home run by Josh Naylor, Cole kept his composure.

Cole had some attitude for Naylor after the game, too.

Gerrit Cole on Josh Naylor’s trip around the bases:

Yankees fans are thrilled with his effort

All in all, Yankees fans are loving Cole right now.

That’s a great start from Gerrit Cole. Earn your money, earn your pinstripes start. He’s earned a tremendous amount of good will

However this game ends, and however this series ends… I don’t wanna hear any more Gerrit Cole slander. Dude earned his pinstripes this series. #RepBx

I know plenty of Yankee fans, though, and they have very short memories. The next bad start and he will be booed again.

Game 5 between the Guardians and Yankees is Monday night at Yankee Stadium.