Georgia Punter Brett Thorson Just Had The Punt Of The Century 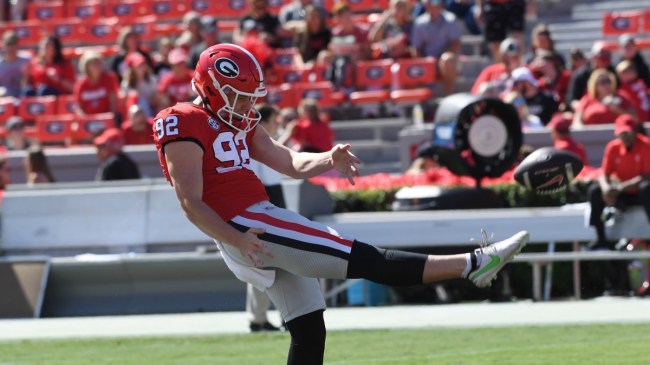 Calling a college football game “The Game Of The Century” is basically a meme now. Ever since LSU and Alabama met as number one and number two in 2012 in the regular season, it’s been overused and is now a mockery of itself. Some were even calling Saturday’s Georgia-Tennessee game “The Game of the Century”.

It’s not the game of the century in any real way, but no one told Georgia punter Brett Thorson. He stole the show in the first half Saturday.

Midway through the first quarter of the game, Georgia was forced to punt. But, what resulted was one of the best punts you’ve ever seen.

The greatest punt in the history of football?!?!? pic.twitter.com/FEIOJ33j6o

That may have legitimately been the best punt in college football history.

Thats the greatest punt I’ve ever seen in my life

You had to know Pat McAfee would be excited.

WHAT A BOMB #ForTheBrand FROM GEORGIA

Holy buckets, what a punt.

and it was a big play in the game. Tennessee gained no yards on their ensuing drive and Georgia had a really short field. One play later, Stetson Bennett found Ladd McConkey for a touchdown to put the Bulldogs up 14-3.

Georgia led 24-6 at halftime of this crucial SEC matchup. The winner will be sitting pretty to go to the playoff.