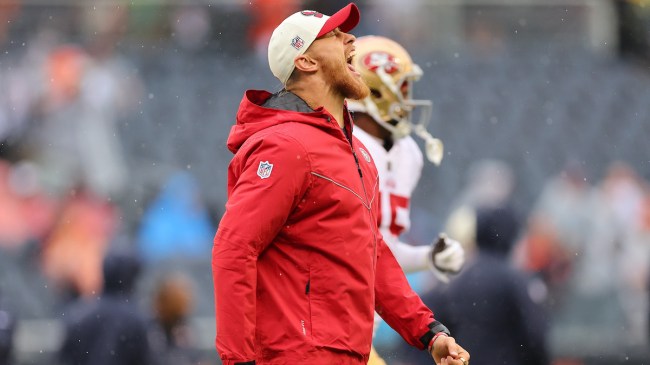 The San Francisco 49ers are off to a shaky start in the Trey Lance era without star TE George Kittle. While his latest injury news is a step in the right direction, it’s still not exactly what fans were hoping for.

Kittle suffered a groin injury during an unofficial practice on Monday ahead of Week 1 and did not play in the loss to the Chicago Bears on Sunday. Coach Kyle Shanahan claimed the star TE was making progress, but Kittle did not practice this week either.

According to Aaron Wilson of Pro Football Network, “league sources not authorized to speak publicly” believe Kittle is not expected to play against the Seahawks. However, general manager John Lynch isn’t ready to rule him out quite yet.

Lynch spoke to Brian Murphy and Kerry Crowley of KNBR on Friday and gave the 49ers Faithful some hope about the possibility of seeing Kittle suit up this weekend.

John Lynch, on with us now, on Kittle: "George is getting better. With a player like him you wait right up til game time. We're going to hold out hope." #49ers

The 49ers GM starts off by reiterating Shanahan’s comments about the tight end making solid progress in his recovery. While it seems Kittle is still not at 100% right now, things could change by Sunday.

Lynch explains that the team will wait right up to game time to make a decision, given how talented and impactful of a player Kittle is.

“This is a long season, but every game takes on great [importance], especially the division ones. So we’re going to hold out hope that George is ready. We’ll see if we get him out here today. I think that’s critical. And if that doesn’t happen, it’s probably not looking good. But George is a type of player that you even wait until Sunday.

The tight end did appear for warmups at Friday’s practice, so it seems things are trending in the right direction. The key will be making sure Kittle isn’t rushed to his return.

George Kittle back at 49ers practice and moving well during warmups pic.twitter.com/Z3TltREKDm

A healthy Kittle is a game-changer on the field, but it’s also been a rare sight in recent years. He missed a major chunk of the 2020 season with a fractured foot and a handful of games last season with a calf issue.

The 49ers are in a tough spot. They don’t want to fall to 0-2 with a loss against the Seahawks. George Kittle returning would massively help prevent that, but the team also doesn’t want him reinjured. Coming back too soon from this groin injury could easily result in another prolonged absence.

49ers fans are definitely hoping Kittle plays in Sunday’s NFC West rivalry game and his return to practice is the best sign of it yet. His injury history gives every reason for the 49ers to remain cautious though.

It's news that could cost the Colts going forwardhttps://t.co/sGnDXeNXlu

49ers fans and fantasy football players will get a true assessment of the star tight end’s recovery on Sunday, but it’s already looking positive.