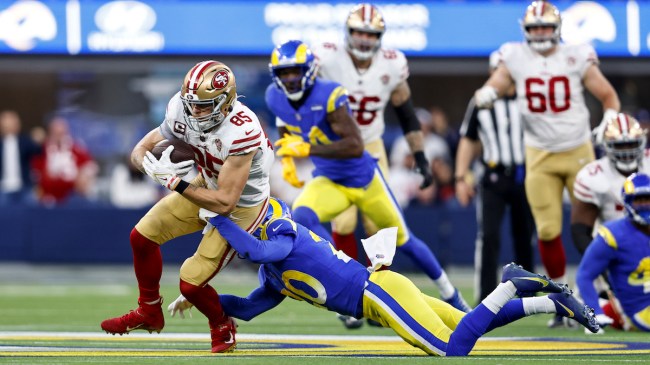 Week 1 of the NFL season is just days away and the excitement is building for the Trey Lance era to officially begin in San Francisco. Unfortunately, recent news regarding one superstar player has left 49ers fans worried.

The San Francisco 49ers have already dealt with a fair share of issues in the off-season. But the team seemed past their biggest concerns with Deebo Samuel extending his contract and Jimmy Garoppolo restructuring his deal.

Fans were expecting a fully loaded 49ers squad to enter Soldier Field against the Chicago Bears on Sunday. However, after suffering a groin injury during Monday’s practice, star tight end George Kittle has caused another wave of concern.

Contrary to coach Kyle Shanahan’s expectations, Kittle has yet to recover and thus did not practice on Wednesday. With the severity of his injury still unclear, he could potentially miss the Niners’ Week 1 matchup on Sept. 11th.

#49ers TE George Kittle has a groin injury, suffered in Monday’s practice, per Kyle Shanahan. Kittle is not practicing today. Unclear right now if it will keep him out this week.

Since his breakout performances in 2018 and 2019, leg injuries have plagued Kittle’s NFL career. He missed half of the 2020 season after fracturing his foot. Then an ongoing calf issue caused him to miss three games in 2021.

The 2022 NFL season hasn’t even begun and the injuries are already popping up for Kittle. Given his history, 49ers fans are understandably concerned.

The three-time Pro Bowler is a force to be reckoned with when healthy, racking up 6 touchdowns and 910 yards in 14 games last season. If the injury persists, his receiving and blocking presence will be sorely missed by the 49ers offense.

With Trey Lance potentially losing one of his best weapons, 49ers fans had plenty to say on the matter. Most aren’t surprised by Kittle potentially missing games once again.

The season hasn’t even started, yet George Kittle is in midseason form with his injuries. Incredible.

It’s another season and another injury for the Niners’ tight end and fans are starting to see an unlucky pattern.

Love the guy but it’s true. He can’t stay healthy.

why can’t we be healthy for once

It’s not Kittle’s first rodeo with injuries, so fans also had opinions on how the rest of the season might play out. Kittle played through his calf injury during the 2021 season before eventually being placed on the IR, so some fans are expecting the worst.

He will play hurt through the first 3 or so games, injury will get worse and then we won’t see him until after the bye week. We’ve seen this all before.

If Kittle is unable to suit up for the season opener, Charlie Woerner will serve as the Niners’ leading TE option. Kittle’s status remains day-to-day though, so there’s still a chance he recovers by Sunday.

Otherwise, 49ers fans and fantasy football owners could be in for another long season with scattered appearances from the star TE.