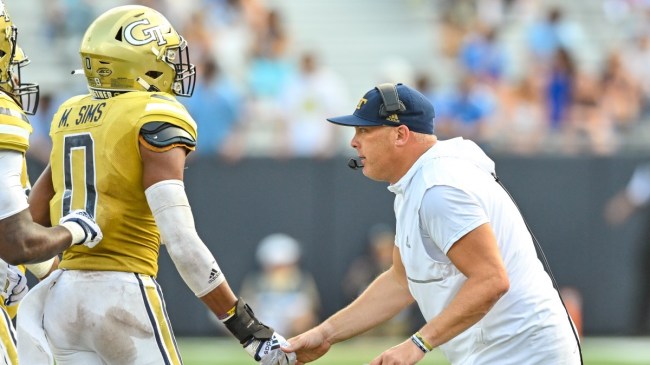 The Geoff Collins tenure at the helm of Georgia Tech’s football program did not go well. Though the former Temple head coach was hired to help transition the program from the triple option of Paul Johnson. But, it did not go well.

Collins went 10-28 for the Yellow Jackets and his best season was 3-7 during the pandemic year in 2020. After getting embarrassed by UCF, 27-10, at home on Saturday to fall to 1-3, Collins was let go on Sunday. Now, the Yellow Jackets have to find a new coach. They’ll likely do that with a new athletic director, as Todd Stansbury is likely to be fired as well, according to reports.

A Georgia Tech fan threw out these names.

There’s only one of these names I really like…

Some big names to remember for Georgia Tech’s potential Next Head Coach :

If Georgia tech hired Deion Sanders to be their next head coach, I might have to ditch being a notre dame fan and get on the Georgia tech bandwagon.

I’m not sure if Deion should take this job. But, it would be a home run from the Ramblin’ Wreck.

Another hot name is going to be Jeff Monken, the coach at Army. Monken runs the triple option, and some at Georgia Tech want to get back to that scheme.

Georgia Tech who just fired Geoff Collins —. Will hire Jeff Monken as the next coach I’m predicting it first 👍👍#CollegeFootball

Though, I actually think his cousin Todd Monken, who is the offensive coordinator at Georgia, would be the better hire than Jeff.

But, no matter what your take is, it won’t be as bad as this one.

Could you imagine Tommy Tuberville leaving his Senate seat to come rebuild (and fail at rebuilding) another program? I definitely cannot.