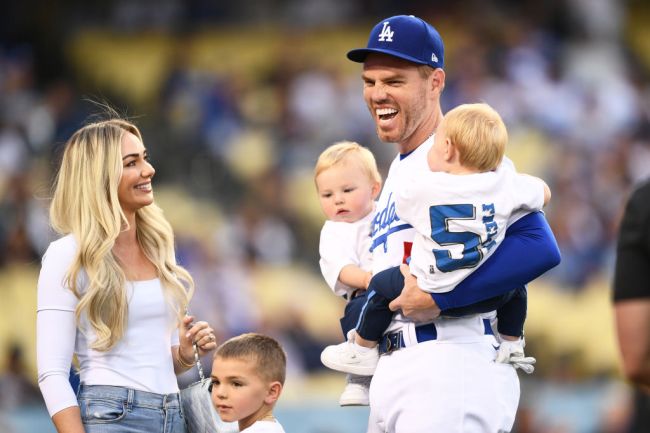 Los Angeles Dodgers first baseman Freddie Freeman has solidified himself as one of the game’s best and it appears his son could be following in his footsteps.

Freeman made headlines earlier this season by firing his agent over how his contract negotiations were supposedly handled. This time, the Dodgers star is in the news for a much more heartwarming reason.

Wednesday was Freddie Freeman bobblehead night for the Los Angeles Dodgers and Charlie, Freeman’s son, threw out the first pitch to his dad. At only five years old, the kid has got an absolute cannon for an arm.

Charlie Freeman with a cannon. 😳 pic.twitter.com/yIWmEZ03Vj

It’s quite common for those throwing the first pitch to shorten the distance by scooting off the mound and closer to the plate. But Charlie isn’t just any average first-pitch thrower. He’s the son of one of MLB’s most influential players in recent history.

The younger Freeman unleashed his pitch from all the way back on the rubber. Even then, his dad was forced into a slight back peddle just to catch it. Afterward, the two came together for a hug that’ll just melt your heart.

All things considered, it’s a pretty impressive first pitch. We’ve seen plenty more that have been a million times worse, that’s for sure. The arm strength displayed already has fans speculating on Charlie’s future MLB career.

Sign him now. We need him since kershaw is out

The Los Angeles Dodgers would go on to defeat the Minnesota Twins 8-5 on Freddie Freeman bobblehead night, moving to 77-33 on the season. Freeman reached first on a fielding error in the bottom of the 3rd for his only offensive production of the night, but he’ll likely remember the night for a very different reason.