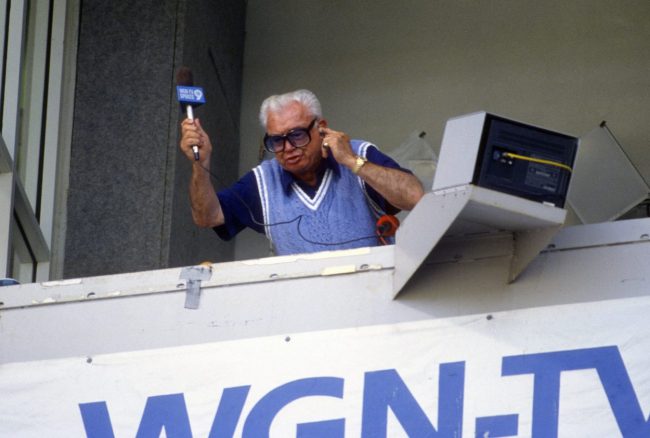 The MLB Field of Dreams is one of the most anticipated games of the year for baseball fans. Though it’s only in its second season, the game at the famed field in Iowa holds a special place in the hearts of fans as well as players.

Although the game may not be around much longer, baseball lovers are still fired up about Thursday’s meeting between the Chicago Cubs and the Cincinnati Reds. Both teams are well out of playoff contention already, but that doesn’t take away how special the Field of Dreams game can be. Just ask Reds superstar Joey Gallo.

Because of the unique nature of the game, FOX is going all out to make sure the TV production is a once in a lifetime experience. That includes going above and beyond to play into the tradition of the game. Though perhaps they may have gone a bit too far.

Reports began to surface on Wednesday night that the network was testing out a hologram version of legendary Cubs’ broadcaster Harry Caray.

Tonight, you’ll see a 7th inning stretch that could only happen with the magic of the Field of Dreams.

Coverage of Cubs – Reds from Dyersville, Iowa tonight at 6p ET on FOX and the FOX Sports App. pic.twitter.com/orvnGgRWR9

The network all but confirmed those reports on Twitter on Wednesday afternoon, alluding to the possibility of the hologram “singing” “Take Me Out To The Ball Game” during the seventh-inning stretch. Caray singing during the stretch was a longtime Wrigley Field tradition which is now continued with celebrity guests.

Baseball fans were less than convinced about the hologram idea.

Hahahaha, this is going to be awful. https://t.co/WTJK37W42f

This is going to be memed into the earth’s crust by tomorrow morning. 0% chance this is anything but dumb/weird. https://t.co/qr3qgmhdNj

Please, @FOXSports. Do not desecrate Harry’s memory like this. https://t.co/SAcyUgSu1g

No one wants this https://t.co/KJWl7WOnEr

If a game between two of the league’s worst team wasn’t enough to scare you away, how about a little added nightmare fuel?

The good news is that the Tupac hologram at Coachella went over so well, right?