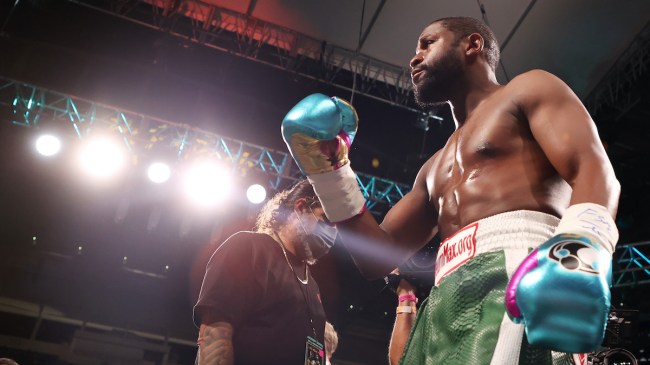 Floyd Mayweather is no stranger to facing unorthodox opponents, having fought both Conor McGregor and Logan Paul, but his next reported bout might just be his most unexpected one yet.

Since retiring from professional boxing with a 50-0 record in 2017, the legendary boxer continues to make exhibition appearances in the ring. Mayweather fought Japanese kickboxer Tenshin Nasukawa in 2018, YouTuber Logan Paul in 2020, and former sparring partner Dan Moore in May of 2022.

Despite rumors of a potential rematch with Conor McGregor, the Mirror has reported that the American boxer will fight British YouTuber Deji Olatunji, KSI’s younger brother, in a Dubai exhibition bout instead.

Fight would take place on November 13 and undercard could feature Jack Fincham and Harley Benn@DonaghCorby_ has the full story 👇https://t.co/szubbktzEW

Mayweather will fight Mikuru Asakura later this September, but it appears he’s already lining up a fight for November. His rumored opponent, Deji, is probably one of the last people that fans expected.

The British YouTuber alongside his brother, KSI, has a massive following in the U.K. with 10.7 million subscribers. So the potential audience he’d bring to Mayweather’s Global Titans Fight Series is likely the reason the bout is even being considered.

That said, Deji’s boxing resume isn’t all that impressive. Hence why the reports come as a surprise. Fans might recognize him as the man who could’ve ended Jake Paul’s boxing career before it even began. The two fought in 2018 with Paul coming out on top.

Deji’s next two bouts, against Vinnie Hacker and Alex Wassabi, also ended in losses. He finally defeated Fousey in September of 2022 to notch his first boxing victory. So it’s a massive step up to then take on the greatest boxer alive.

His 1-3 record would suggest this bout wouldn’t even be close. But fans didn’t expect Logan Paul to stand his ground, so anything can happen. However, Deji does not have the same large physique that likely helped Paul in his bout.

According to boxing reporter Donagh Corby, an agreement was reached after Mayweather’s camp initiated talks last week. The deal “is not yet 100% over the line” though, so it could still fall apart.

If the two parties do follow through, the exhibition bout will happen on November 13th under the Global Titans Fight Series.

Mayweather’s previous exhibition bouts usually went between 6-8 rounds with no judges, meaning only a KO will result in a win. This bout will likely follow a similar ruleset.

If Floyd Mayweather vs. Logan Paul wasn’t surprising enough, this rumored bout surely tops it. Hats off to Deji for somehow making it happen.