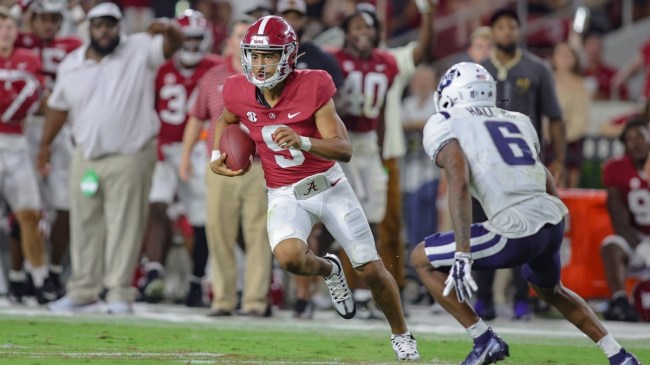 Sports Apparel monster Fanatics is now offering authentic college football jerseys with real names on the back for the first time. It’s not only Fanatics’ first time but believed to be the first time that current college players’ names have been used on authentic jerseys for any company. Players will receive a portion of the proceeds through NIL.

Many of the top brands in college football are included

Overall, around 40 programs are included in this round of schools that now have customized jerseys available. It’s not just for a few players on each team. Almost all of the players on each team, even walk-ons are available to be selected when purchasing from Fanatics.

Featured brands include Nike, Adidas, and Under Armour

Whose jersey are you buying? pic.twitter.com/D0VlPxLN3I

There are some notable exceptions. Players not included for Penn State include starting quarterback Sean Clifford and star freshman running back Nick Singleton. Each school seems. to have a couple of players missing.

Student-athletes have the opportunity to opt into the unique custom NIL jersey program. Players will benefit for the sale of a jersey with their name and number. Fans can choose a Nike replica player jersey via the drop-down roster menu on shop.UTsports.com.

Still, we don’t know how much of the $139.99 price tag will go directly to the player selected.

People are excited by the new college football jersey options

Fans are excited to finally be able to purchase real college football jerseys with names on the back.
@sinatraswinery echoes what many of us are thinking.

Been a long time coming!

Of course, people are going to complain about the price tag.

It will be fun to find out what players make the most money on these jersey sales this year and in the future. As always, my bet is on an Alabama player.