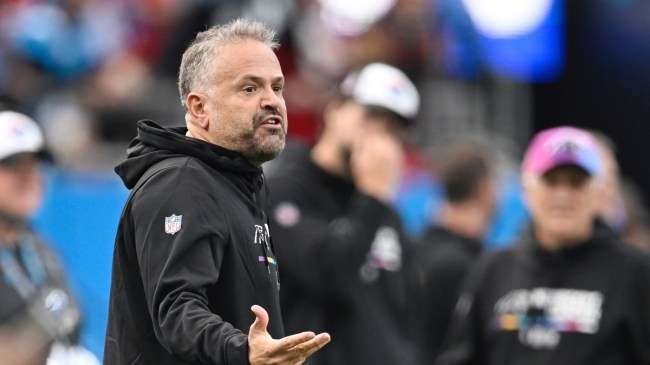 Matt Rhule’s tenure as the head coach of the Carolina Panthers was a disaster. He went 11-27 in his two-plus seasons in Charlotte as the Panthers never got it going with him at the helm. He was fired on Monday.

The #Panthers have fired Matt Rhule.

Of course, the former standout college coach is now being rumored for some of those jobs as well. Rhule did author incredible turnarounds and Temple and Baylor in near-impossible circumstances. And, his name is coming up for one blue-blood program in particular.

Matt Rhule is being linked with the Nebraska opening.

Since Nebraska fired Scott Frost back in September, a ton of names have been linked to that job.

And now, Matt Rhule’s name is all over Twitter when it comes to the Nebraska job.

Not telling anyone how to run their athletic department, but if Nebraska was smart, they'd have him hired and on the road recruiting by the end of the week

I don't know who Matt Rhule's agent is but he is about to be involved in a bidding war. My knee-jerk destinations
1. Nebraska
2. Wisconsin
3. Georgia Tech
His availability actually may cause some teams to fire their coach he's that good. (More)

But, the Athletic’s Bruce Feldman threw some cold water on the idea, saying Rhule isn’t a lock to take the Nebraska job.

From Bruce Feldman today via the atheltic article….Matt Rhule taking the Nebraska job is not a given. pic.twitter.com/QUBiIjQ08Q

And, here are some odds on where his next landing spot will be.

Fans of all kinds of teams are giving their opinions on the new rumors.

Of course, someone had to get in one of the best memes of all time.

But, this Nebraska fan disagrees. He contends Rhule isn’t a good enough recruiter. That’s especially important for a school like Nebraska that needs to recruit nationally.

If Matt Rhule is the builder that we need to get recruits to Nebraska why were his Baylor recruiting classes in 2017,2018,2019 ranked 40th,29th,36th when he was in the middle of the state of Texas?! Our dumpster fire of a program out recruited him & his replacement. Not impressed

Not all Husker fans agree, though.

Nebraska should 100% evaluate and contact Matt Rhule. Unless winning double digit games in a year just isn't the plan. In that case, bring Riley back.

One thing is for certain. Matt Rhule is one of the hottest names on the coaching market and seeing where he ends up will be fascinating.