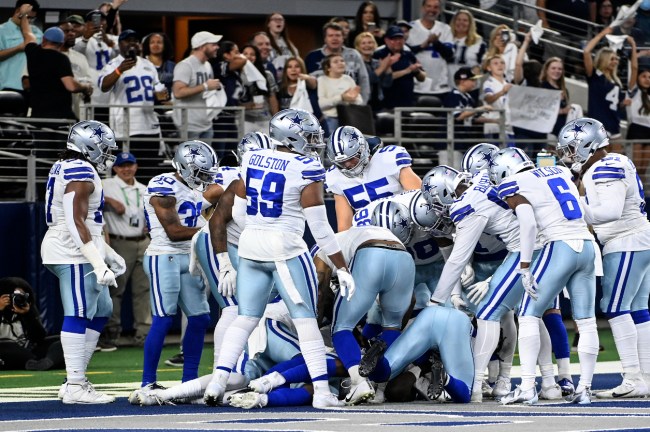 The NFL continues to hold joint practices across the league. Sometimes these are beneficial and fun to watch. But, other times they are full of fights between the opposing teams.

On Thursday, we saw the Denver Broncos and Dallas Cowboys hold a joint practice in Colorado, with their preseason game against each other scheduled for Sunday evening in Denver.

However, things got a bit out of hand as the two teams got into a bit of a scuffle.

Fight between the #Cowboys and #Broncos in joint practice.pic.twitter.com/0JtYrPb6dJ

Shortly after, another fight broke out at camp between these two teams.

Yet another fight between the #Broncos and #Cowboys pic.twitter.com/InOHEdsvXg

Bradley Chubb also trucked Ezekiel Elliott, and maybe the Cowboys weren’t too thrilled with the aggressiveness of this hit.

Bradley Chubb with the hit stick on Zeke Elliott 💪pic.twitter.com/yHorLAfdN3

Things are getting out of hand quickly between the two teams, and yet, practice is still going on.

I’m honestly surprised that the Cowboys O and Broncos D are still practicing. One of the most out-of-control days I’ve ever seen on the practice field

Broncos defense has got into five fights with the Cowboys offense.

Denver’s offense, however, hasn’t had a single fight with Dallas’ defense.

If tensions continue to boil over, then things could really get out of hand for Sunday’s preseason tilt between the two sides.

Oh, let’s not forget that former Cowboys LB Randy Gregory is wearing a Broncos uniform now, so there has been extra jawing all around.

Cowboys Terence Steele AGAIN getting physical in another fight after the play with the Broncos and even ex-Cowboy Randy Gregory doing some jawing as well 👀…#CowboysNation pic.twitter.com/l2URwSo5JC

Get your popcorn ready for Sunday’s game between these teams, although it’s unlikely that many starters actually see playing time.