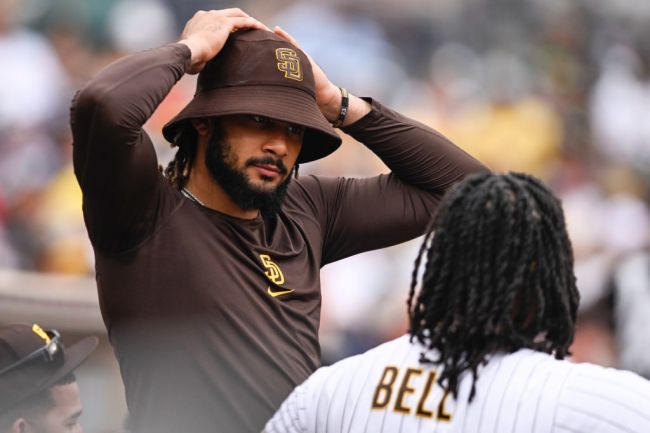 When the San Diego Padres shortstop was suspended last week for violating the MLB’s performance-enhancing drug policy, he put the blame on a medication he supposedly used to treat ringworm. It wasn’t a convincing story by any means and fans immediately called him for giving a false excuse.

While Tatis Jr. has accepted the MLB’s punishment with minimal pushback, the same can’t be said about his father. On Monday, Fernando Tatis Sr. fired back at the MLB and offered an equally questionable explanation for his son’s suspension.

It appears Tatis Jr. was the victim of a horrible haircut.

Fernando Tatis Sr.: "What involves him (Tatis Jr.) is a steroid that contains a spray called trofobol… He got a fungus due to a haircut. His mistake was not reading what it contains, which is what apparently makes him guilty of something totally unknown".

Tatis Sr. defends his son as you’d expect from any father, but his explanation doesn’t offer any extra clarity. Now instead of treating ringworm as Tatis Jr. claimed, “a fungus due to a haircut” is the supposed explanation. It’s somehow even less believable.

Obviously, Tatis Sr. has a bias when speaking about the situation, but his arguments are near comedy. He says his son’s only mistake was not reading the ingredients and disagrees with how that “makes him guilty of something totally unknown.”

If that’s truly the case, then it’s indeed unfortunate. But the explanations they’ve given so far don’t provide the most credibility. Not to mention, you’d simply expect more responsibility on the player’s behalf when millions of dollars are on the line.

Fernando Tatis Sr: "It was a mistake that could have been handled differently, destroy the image of a player for such a small thing, for a situation like this. Is a catastrophe not just for Tatis Jr, but for all baseball. There’s millions of fans that will stop watching baseball"

Tatis Sr. doesn’t stop there though. He declares the MLB’s handling of the suspension as a catastrophe not just for his son but for baseball fans everywhere. It gets even spicier when he claims that millions of fans will stop watching just because of this.

Of course, it wouldn’t be complete without Tatis Sr. downplaying the banned substance use as a whole. PED scandals plague the sport of baseball, hence why the rules are there in the first place. But clearly, Tatis Sr. doesn’t believe that applies here.

Fernando Tatis Sr.: "All of this has happened because of something that is not worth this issue. This is something for the skin, that’s something that’s not performance enhancing and has no testosterone. It has nothing to help you improve in the game."

The MLB has stated that Tatis Jr. tested positive for clostebol, an anabolic steroid that essentially mimics testosterone. According to Fernando Tatis Sr., the medication in question only treats skin conditions and thus provides no performance-enhancing properties. Clearly, somebody is wrong in their assessment.

If only Tatis Jr. had just checked the ingredients on the medication he was allegedly taking. Then none of this would have happened, but obviously, that’s not how his father views it.