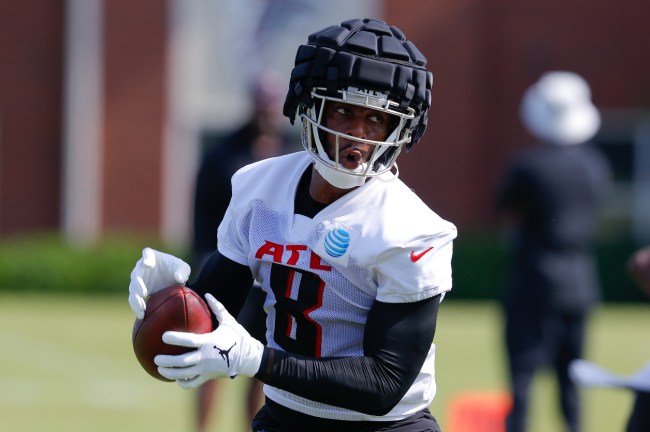 The Atlanta Falcons aren’t expected to win many games this coming season. The rebuild in Atlanta is in full force, and Marcus Mariota looks set to be the team’s starter this season until rookie Desmond Ridder is ready.

Nonetheless, there are some exciting players on this team. Perhaps the most exciting is tight end Kyle Pitts. The 2021 No. 4 overall choice underwhelmed in his rookie season, although there are many reasons for those struggles.

Now, underwhelmed is an understatement. The former Florida Gators star caught 68 passes for 1,026 yards but just one touchdown. So, a 1,000-yard season with all of the struggles in Atlanta isn’t a bad start to his career.

In camp, Pitts has been making a series of eye-popping plays.

Just throw it up to Kyle Pitts

Kyle Pitts against Linebackers should be illegal.

Pitts is a monster to deal with, and the Falcons also have first-round wide receiver Drake London joining forces this season. Match that with hybrid offensive player Cordarrelle Patterson, and there are some exciting things to watch this year.

Fans saw these clips of Pitts and got super pumped up about this season.

Best in the league with a good QB https://t.co/5tzldbugcj

Especially with the Ridley suspension, Kyle Pitts is poised for a monster sophomore season.

One of the best TE prospects ever and there is so much room to grow. QB play is something to worry about, but the talent in unquestioned.

Gonna be a very interesting season for Pitts.

Can Pitts take a step forward in 2022? Mariota is also set for a prove-it season, so perhaps there’s added incentive for both to get it going. With the suspension of Calvin Ridley, Kyle Pitts should be the clear-cut No. 1 pass-catcher until London gets rolling.

Ladies and gentlemen, the Kyle Pitts show has arrived.