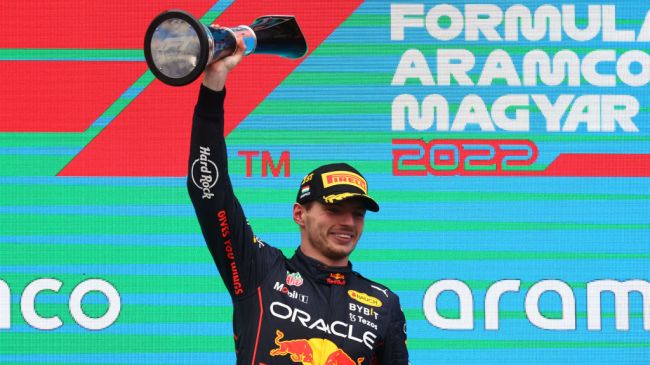 Red Bull Racing’s Max Verstappen delivered an impressive drive at the Hungarian Grand Prix to further extend his lead before the Formula One summer break.

Saturday’s qualifying saw the defending World Champion encounter power unit issues, leaving him to line up 10th on the grid for Sunday’s race. Even worse, Ferrari seemed past their early season struggles by completing a front-row lockout.

The race weekend finished with an unexpected result as Verstappen recovered from P10 to take the lead on lap 51 of 70. Thanks in part to some clever strategy and world-class driving, the Dutchman finished with his 8th race win of the 2022 F1 season.

However, Sunday’s drive wasn’t without bumps in the road for the Verstappen. Issues with the clutch led him to pull a full 360° spin on lap 42 of the race. But like an absolute boss, Verstappen kept it together and continued on.

The spin did cost Verstappen one place to Charles Leclerc, but he ultimately went on to pass the Ferrari driver soon after, who was struggling on the hard compound tires.

“I caught him, then I spun, did a 360, lost a position again. Yeah, it was a bit unlucky of course,” Verstappen explained in the post-race presser. “But then we just kept our heads down, got him back again and pulled a gap.”

Heading into the summer break on a high! 😎🏖#HungarianGP @redbullracing pic.twitter.com/BJkxz0tUkf

Heading into the F1 summer break, Verstappen has an 80-point lead over Leclerc in the driver standings. His Red Bull teammate, Sergio Perez, is only 5 points behind the Ferrari driver. Red Bull also tops its standings with a 97-point lead over Ferrari.

With Ferrari unable to shake its inconsistencies, it’s very much looking like the Max Verstappen will be celebrating back-to-back World Championships with more 360° spins and doughnuts.