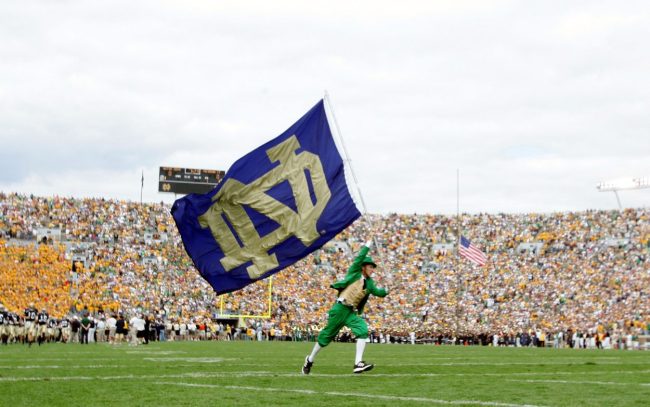 With Stephen A. Smith temporarily off the air at ESPN while he rehabs a shoulder injury, Chris “Mad Dog” Russo has stolen the show.

The famed New York radio host is up to his old tricks again on First Take. But co-hosts Ryan Clark and David Pollack could barely believe what they were hearing this time around.

The list begins innocuously enough. Russo puts powerhouse programs Oklahoma and USC at Nos. 5 and 4 respectively. But then things go off the rails. Checking it at No. 3 was Alabama, which had Clark truly baffled. Michigan checked in at No. 2, right above the Crimson Tide. But what left Clark and Pollack speechless was Notre Dame at number one.

The Fighting Irish are undoubtedly storied, but they’ve won three fewer national championships than Alabama and haven’t won one since 1988. The Wolverines last one a natty in 1997, but their nine national titles are seven fewer than Alabama’s 16.

While most-storied doesn’t always mean most successful, Russo’s list drew a lot of heat. Including some from Stephen A. Smith himself.

OMG. @MadDogUnleashed is gonna make me hobble back to @FirstTake. What a sorry A-List. @NDFootball is not the No.1 program in CFB. I don’t want to hear it. @AlabamaFTBL all day, everyday. @MollyQerim, check him. Come on Doggie! You’re better than that.

@MadDogUnleashed you’re drunk.
How can you name Michigan the 2nd most storied college football program when they haven’t won a championship (not shared) since 1948 and leave Ohio State out of your top 5?!

Welcome to the slow season. https://t.co/QGsd01qoFU

Mad Dog Russo has the keys to the car over at ESPN until Stephen A. Smith returns to the set. And by the looks of this list, that car is a Ford Model T.