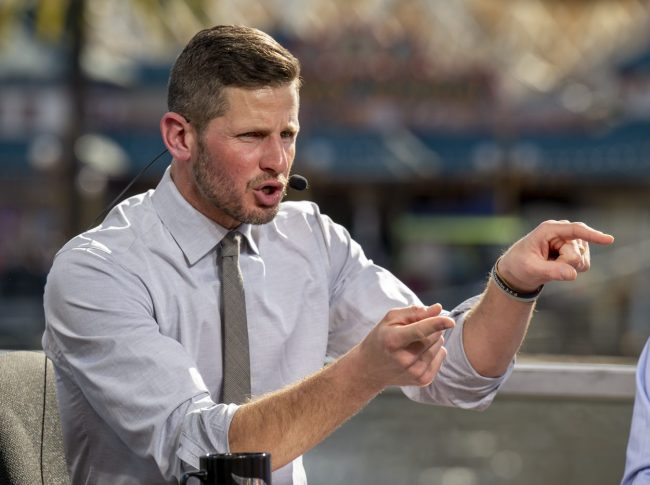 But Orlovsky has been a bit of a punching bag for football fans this offseason. Particularly after he released his list of the top-five NFL quarterbacks under the age of 25 a few weeks back. Orlovsky got hammered by fans on Twitter for the list. Though that still probably won’t sting as much as the burn he received from ESPN co-worker Matt Barrie on Tuesday.

Barrie and Jay Harris were co-hosting an episode of SportsCenter and had Orlovsky on to discuss a pair of quarters. Harris asked Orlovsky whether Zach Wilson of the New York Jets or Daniel Jones of the New York Giants would have a better year in 2022.

The camera cut to Orlovsky, who was video calling in. And then this happened.

“He’s not that deep of a thinker” pic.twitter.com/NwPFgC64w7

Troubles with Orlovsky’s internet connection left him as still as a statue. Harris seemed confused at first, asking whether he was frozen or just pondering the question. That’s when Barrie came in with an absolutely brutal burn.

“Dan are you thinking or are you frozen,” Harris said. Before Barrie chimed in and said “there’s no chance he’s pondering that well. He’s not that deep of thinker,”

The segment eventual cut away from Orlovsky, but viewers absolutely loved the jab from Barrie.

I can’t believe they crushed @danorlovsky7 like this… but yeah, he needs to get faster internet and stop using his neighbor’s Wifi. 🤪 https://t.co/WCTjv30dp5

They did @danorlovsky7 so dirty just for having bad wifi 😭 https://t.co/3qvQEKcUCS

To Orlovsky’s credit, he seemed to take the whole thing in stride, sharing the video on his Twitter account. Even so, he may want to consider some aloe vera for those burns.