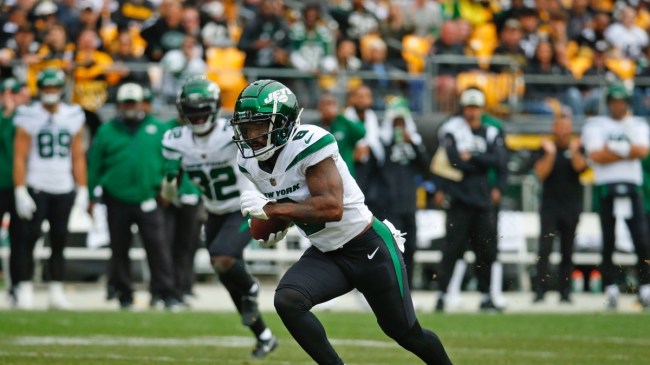 Elijah Moore was supposed to be a long-term answer for the New York Jets at wide receiver. The Ole Miss product had 1193 yards on 86 catches with 8 touchdowns in the shortened 2020 SEC season and the Jets used the 34th overall pick on him in the 2021 draft.

But, he’s been up-and-down. After a very slow start last year, he had 18 catches for 264 yards in 3 touchdowns in his last three games last year, and was expected to do big things this year. But, he only has 16 catches for 203 yards without a touchdown this year, despite New York being a surprising 4-2. Now, Moore wants a change of scenery less than 20 games into his career.

Sources: #Jets WR Elijah Moore, frustrated with his role and usage, has asked for a trade. The team has no plans at all to trade him. The former second rounder was targeted once in the win over the #Packers, but the play was negated by a penalty. pic.twitter.com/JJvSbnxXZ1

Of course, the key part of that is that the Jets have no intention to trade him.

Some positive news on #Jets, Elijah Moore front: from people inside the building that @Willpa11 has spoken with they say there’s nothing to worry about with this trade request, ‘this is just being blown up’ + just his way of saying I want the ball more: #TakeFlight pic.twitter.com/HVzyOEubP6

Still, people were rubbed the wrong way by the request.

"Some people would rather lose and play well than win and look like they didn't contribute."@BartScott57 weighs in on Elijah Moore's trade request with @JeaneCoakley on Jets Game Plan https://t.co/JXiXeEOUOG pic.twitter.com/wn0193q85f

6 weeks, where his team trails ONLY the MIGHTY Bills & Chiefs in the standings. 3 weeks with a backup QB.

And this dudes crying “trade me!”??

Be a part of the culture, or kick rocks bro. This ain’t it 👎🏻 No more room for the ME guys #nyjets

It’s further proof that things can never be too good for the New York Jets.