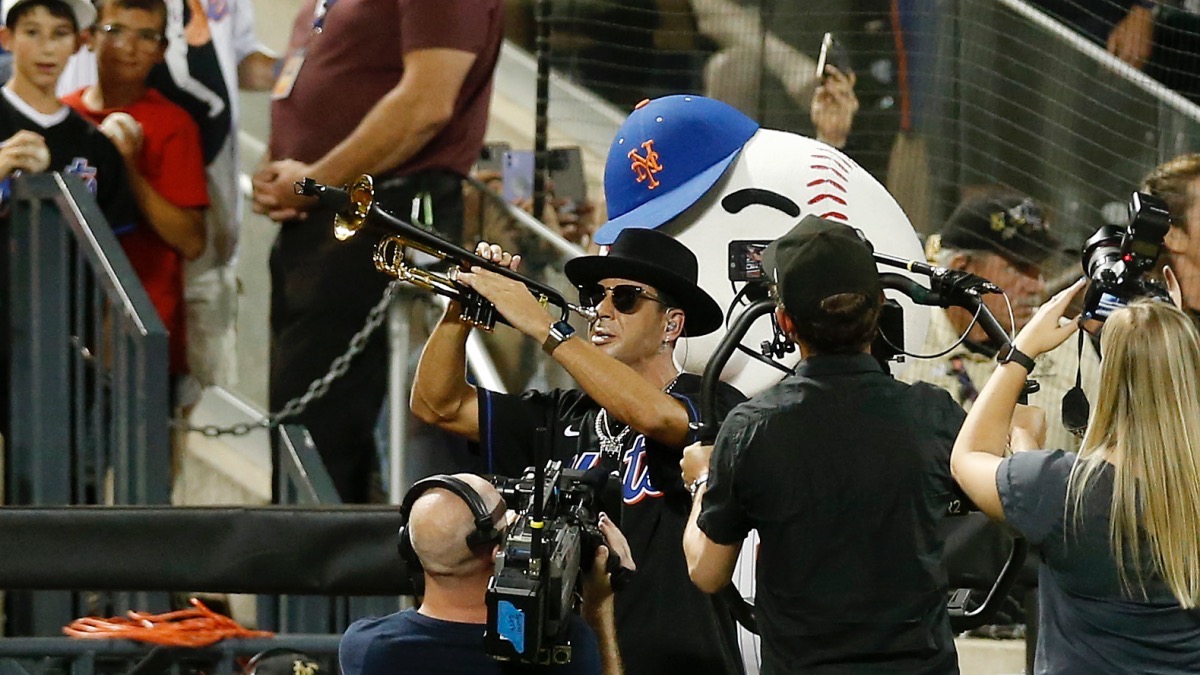 Mets’ closer Edwin Diaz has gone viral more than once this year for his incredible intro music. The two-time All-Star has become synonymous with the unmistakable trumpet solo by Timmy Trumpet from he and Blasterjaxx’s hit, Narco.

Mr. and Mrs. Met, the mascots for the Mets, have been playing plastic trombones at Citi Field all year, and they’re now popping up in the stands with regularity.

Here he is recently in the first viral video:

Trumpetmania hit an entirely new level this week with something no one has ever seen at Major League ballpark) Timmy Trumpet, the stage name for for Timothy Jude Smith, came to Citi Field Monday to throw out the first pitch, play Take Me Out to the Ballgame on his trumpet and hopefully perform his solo during an Edwin Diaz entrance from the bullpen.

The Mets lost to the visiting Dodgers 4-3 and Diaz never took the mound. No matter.

Trumpet, who says he is now a “Mets fan for life” stuck around for Tuesday’s game in the hopes that Diaz would get a save opportunity against the consensus best team of baseball.

Edwin Diaz said he is really happy Timmy Trumpet will give it one more shot tomorrow. “He’s coming back because I didn’t pitch tonight, so I hope I can get the ball and hear the trumpets.” Diaz said he was going to pitch the 10th tonight if the Mets tied it.

Timmy Trumpet’s now a VIP for life at Citi Field:

The decision paid off, as Jacob deGrom fired seven innings of one-hit ball, and a scoreless eighth inning by Mets setup man Adam Ottavino gave Diaz the ball with a 2-1 lead heading into the top of the ninth.

After the Mets were retired in the eighth inning, Trumpet came onto the field and played the famous melody of Narco in a clip that was well over 5 million views in less than twelve hours.

The world-renowned DJ from Australia is currently ranked as the ninth-best DJ in the world by DJ Magazine (Link to these rankings). He had never attended a baseball game prior to Monday night, but pledged that he would be back at Citi Field if the Mets play in the World Series.

Diaz has been spectacular for the Mets this season.

Flushing Meadows, the Queens neighborhood that hosts Citi Field as well as the US Tennis Center, is no stranger to famous musical performances. Most famously, The Beatles played a concert at Citi Field’s predecessor Shea Stadium in 1965, setting world records for attendance and gate receipts at the time.