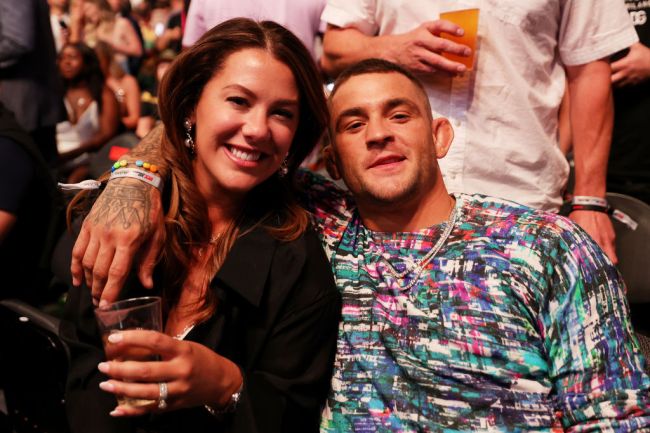 UFC 276 was the biggest card of the year.

But what fans didn’t expect is a near-brawl between two lightweight contenders not on the card.

No. 2 ranked lightweight contender Dustin Poirier and No. 5 ranked Michael Chandler were held back by security after an heated altercation at T-Mobile Arena in Las Vegas.

Welterweight contender Gilbert Burns tweeted out a video capturing the expletive-filled moment. At multiple points, Poirier calls Chandler a ‘fake’ and can even be heard saying, “I’m going to f*ck you up.”

As you can see in the video, event security was quick to keep the two from getting too close. Even current light heavyweight champion Jiri Prochazka steps in to hold “The Diamond” back.

This isn’t the first time the two lightweight contenders have exchanged words either. Following Charles Oliveira’s submission of Poirier at UFC 269, Chandler tweeted out a jab at the way Poirier lost.

I would never ever quit…I went out on my shield after being separated from consciousness, congrats to Oliveira… #ufc269

The two exchanged more words earlier this year when “The Diamond” critiqued Chandler following his knockout win over Tony Ferguson at UFC 274. While no more chaos has ensued beyond the verbal insults, it got pretty damn close at UFC 276.

We very well could see something in the works for the future, as neither fighter currently has their next fight booked yet.

I want to fight

Former interim lightweight champion and current No. 2 ranked Dustin Poirier hasn’t fought since his loss in December of 2021 at UFC 269. While No. 5 ranked Michael Chandler is coming off a recent win earlier this year at UFC 274.

Could we witness this exciting lightweight matchup before the end of the year? We’ll just have to wait and see.