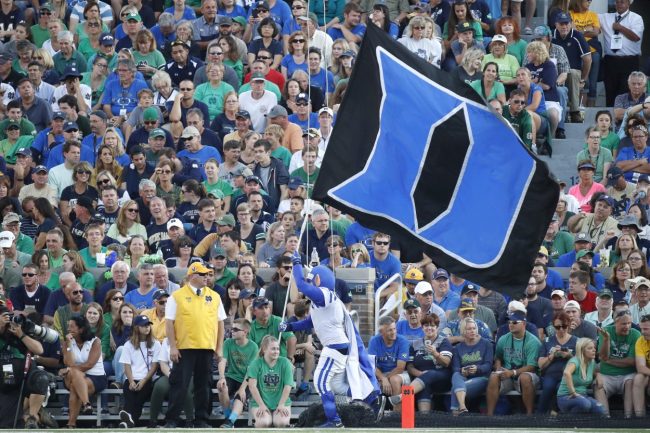 We are very quickly hurtling toward the start of the college football season and everything that entails. Until that point, however, we are still in the offseason which means peak offseason football content.

Duke’s 6-foot-7, 329-pound sixth-year senior O-lineman @chanceLytle1998 singing opera will bring a tear to your eye. It is so beautiful #BigUglies 🔵😈 pic.twitter.com/qiIfOtC2od

Meet Duke grad transfer Chance Lytle. Lytle, a Texas native who transferred to the Blue Devils from Colorado, brought his teammates to their feet with a remarkable opera performance.

As it turns out, 6-foot-7, 329 pound graduate student earned a dual degree with the Buffaloes. The first was in psychology, but the second was in music and voice performance. He also showed off his unique talent to the ACC Network earlier in the offseason.

On the field, Lytle is a mauler who appeared in 30 games over four season for Colorado. Off it, he’s clearly a renaissance man. In addition to his musical gifts, he’s working on a master’s degree in management studies from Duke’s Fuqua School of Business.

Lytle’s incredible performance is just the latest in the #BigManSingin trend that continues to sweep the football world this offseason. Philadelphia Eagles’ rookie defensive tackle Jordan Davis blew his teammates away last week with a performance of Rick James’ hit Mary Jane.

As for the Blue Devils, they’re in the the first year under new head coach Mike Elko and looking to turn things around after a 3-9 season a year ago. Duke and long-time head coach David Cutcliffe mutually parted ways following the difficult 2021 season.

If Lytle’s performance is any indication, new coach Mike Elko’s got the talent acquisition part of the job down already.