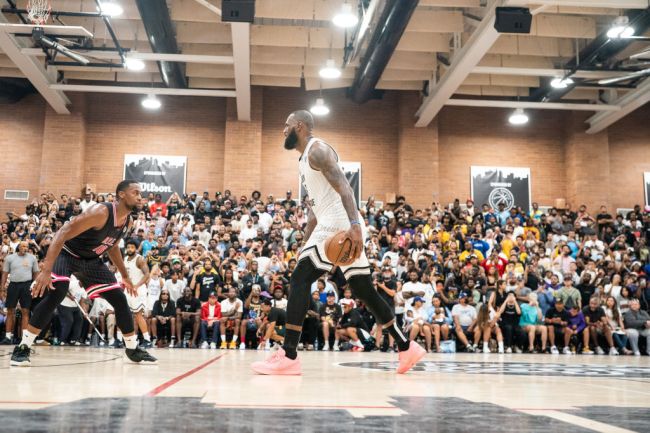 The NBA season hasn’t started yet, but basketball fans were in for a treat this past weekend. LeBron James teamed up with DeMar DeRozan for an appearance at the Drew League on Saturday.

With the Los Angeles Lakers missing the NBA playoffs this year, social media was ready for LeBron’s much-anticipated return to the court. And the four-time NBA MVP put on a show, dropping 42 points and 16 rebounds in a 104-102 victory.

In the flurry of LeBron highlights posted, opposing Drew League player Dion Wright got cooked harder than most. A video tweeted out by Bleacher Report shows Wright’s alarmed expression as LeBron drains a fadeaway shot over him. The caption reads, “Bron really had this man fighting for his life.”

Well, Wright didn’t exactly agree. Following the game, he took to Twitter and clapped back at the haters, reminding everyone that he and his team came to play.

He dropped 40 I had 20 for every 2 points he had I had 1 . . . That’s really a once in a lifetime player we had no nba guys they had 2 and only loss by 2 points if bron doesn’t show up we win for sure https://t.co/oodAQhiKUU

Wright, who guarded LeBron on several possessions over the game, ended the night with 20 points after his team gave up the lead late in the fourth quarter. But as Wright noted, the team made it competitive without any NBA talent on their side. They even had the possibility of a game-winning 3 at the buzzer when LeBron missed his second free throw with 4.5 seconds left.

To only lose by 2 points, you’ve got to give them props for that.

Saturday’s appearance marked LeBron’s first return to the famed pro-am basketball league since 2011. DeRozan, who chipped in 30 points on the night, is a more frequent Drew League participant though.

But with pro-am teams bringing intense competition like this, perhaps more NBA stars will make appearances before their season starts. If that happens, Wright and his team definitely won’t back down from the challenge.