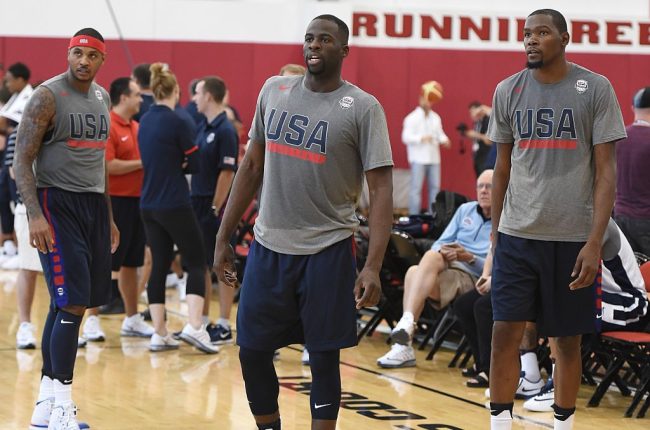 If there’s one thing we know about Golden State Warriors forward Draymond Green, it’s that he’s not afraid to speak his mind.

The 4-time NBA champion is widely considered the NBA’s loudest, and perhaps most annoying, trash-talker. Most recently, he gave a spicy take on the debate between his 2017 Golden State Warriors and the 1998 Chicago Bulls.

Green started his own weekly podcast on Colin Cowherd’s podcast network, The Volume, back in November 2021. For better or worse, it’s given him the opportunity to share even more of his thoughts.

On the latest episode of The Draymond Green Show, the Warriors forward was asked to pick between Carmelo Anthony and Kevin Durant for better scorer in their prime. You might think he’d pick his former teammate, but that’s not what happened.

“Oooh, Carmelo or Durant in their prime. Wow, wow. I’m going to go with Melo,’ Green responded after thinking it through for a bit.

That’s tough for Durant, who won two NBA championships with Green on the Golden State Warriors. But Green offered up an interesting explanation for his decision.

During his first or second season in the NBA, the Warriors forward faced off against Melo in the Garden. Green specifically remembers Melo pulling the same move in back-to-back plays, forcing the referee to call a previously missed foul.

“As a scorer, you go into slumps. You have bad shooting nights and the one thing that breaks scorers’ slumps can be a free throw,” Green explains. “And just knowing Melo could get to the free throw line like that, that’s why I’m gonna pick Melo.”

It’s a fair point by Green, but the same argument can surely be made for Durant. Although he did end by admitting that you really can’t go wrong with either player.

Durant has called out Draymond Green’s comments previously, so chances are he won’t agree with his former teammate’s most recent take. However, given all the drama with the Brooklyn Nets, he’s probably too busy to take notice.