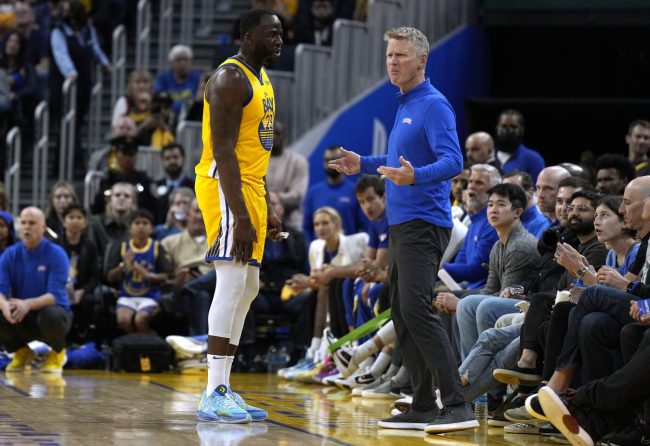 Golden State Warriors forward Draymond Green is never one to hold back if he feels he has something that needs to be said.

Take, for instance, Green trash talking Boston Celtics forward Jaylen Brown well after the NBA Finals were over. Then there’s the case of Green going after the Los Angeles Clippers during the ESPY Awards.

But Green’s latest incident may end him up in some hot water with Warriors coach Steve Kerr.

I’m watching the 98 Bulls vs Utah in the Finals… I can’t help but notice our 2017 team would’ve beaten these Bulls by a dub and these Jazz by 40 if they’re going to play these brands of basketball. And that’s why it’s dumb to compare Era’s

Green was watching the 1998 NBA Finals between the Michael Jordan-led Chicago Bulls and the John Stockton and Karl Malone-led Utah Jazz. While doing so, he came up with the conclusion that his 2017 Golden State Warriors team would blow both teams out. Though he did add the caveat that the way the game has changed makes comparing eras useless.

Learn to appreciate things for what they are. Analyze the game. And stop the unnecessary debating.

Yours Truly,
The New Media

This game is being played from the free throw line and in.occasionally stepping out to the 3.

ESPN analyst and Richard Jefferson quickly chimed in on the matter.

Bro your 2017 team is the 2nd best team I played against BUT LETS CALM DOWN🤣🤣🤣!! Also, I like the move of this text on Sunday afternoon. EVERY SHOW TOMORROW “ Draymond SAID WHAT” 😂😂😂 https://t.co/3MZMkZzQKD

Jefferson entered the league in 2001 and only just retired in 2018. He seemed to disagree with Green’s take, though he did praise the 2017 Warriors in the process.

One person that did agree with Durant was former teammate Kevin Durant, who has a lot on his plate these days.

I can’t tell you what the results would be, but I do know that steve kerr would’ve demanded that we put steve kerr in as many pick and rolls as possible https://t.co/PxeBdsCt3F

Durant started for that Warriors team along side Green, Steph Curry, Klay Thompson and Zaza Pachulia. He points out one big fact about a hypothetical series: then Warriors coach Steve Kerr would seek out 1998 Bulls starter Steve Kerr on defense on every possession.

So while Green is lifting Kerr up as a coach, Kerr may well have something to say to him about just how good that 1998 Chicago Bulls team was.

That’ll be quite the interesting conversation.