UCLA Quarterback Dorian Thompson-Robinson Just Had Three Of The Year’s Best Plays In One Game! 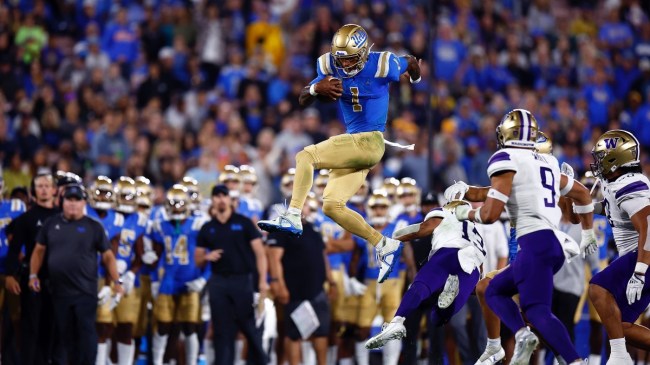 UCLA fifth-year starting quarterback Dorian Thompson-Robinson is known for his offensive exploits. DTR, as he is known, went over 10,000 yards of career total offense for the Bruins in their 40-32 upset win over #15 Friday night. And, Robinson was terrific. DTR was 24-33 for 315 yards and 3 touchdowns through the year. He added 53 yards and a touchdown on 10 carries, too. He may have even worked himself into the Heisman race a little bit.

Robinson had three game-changing highlight plays to lead the Bruins to victory.


Robinson was a human highlight reel

In the midst of a 2nd quarter flurry for the Bruins, he had a pass deflected at the line of scrimmage. The deflection looked like it was going to be intercepted, but he had other ideas.

What a hit. You just don’t get to see a lot of hits like that anymore with all of the (good) rules about how you can hit defenseless players. And, I’m not necessarily sure why the defensive lineman was not considered defenseless. But, what a great hit. UCLA would end up scoring on the drive

I’m not sure it was the best I’ve ever seen. After all, I watched Johnny Manziel against Alabama. But, it’s definitely the best defensive play I have ever seen a quarterback make.

But, that wasn’t the only highlight play DTR made Friday night. People are loving this juke, too.

Dorian Thompson Robinson with one of the most disrespectful jukes ever 😂😂😂 pic.twitter.com/KJm6lbnY2u

But, there is more. He had a sick hurdle, too!

DORIAN THOMPSON-ROBINSON HURDLE WITH ALL THE VERT OH MY 😨😨😨 pic.twitter.com/eqRMCgSz2j

What a night from the fifth-year player.

Alas, UCLA is now 5-0 and will surely be ranked in next week’s AP poll.