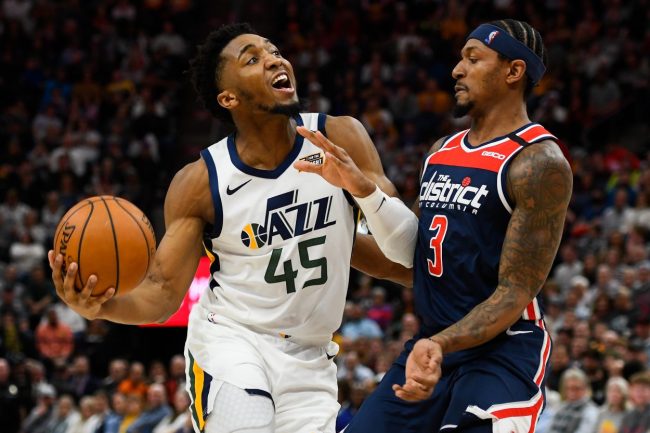 When it will happen, nobody seems to know. But sooner or later, the Utah Jazz are likely to trade superstar guard Donovan Mitchell. The Jazz stunned the basketball world when they traded star center Rudy Gobert to the Minnesota Timberwolves for a monster haul. The move immediately put the attention on Mitchell, who reportedly initially intended to stick with the team during its rebuild.

Since then, Mitchell’s name has come up in a plethora of trade talks. The New York Knicks are the team most-often involved. But the Miami Heat and others have also come up.

The two latest teams, however, have taken basketball fans by surprise.

Wizards And Hornets Join The Chase For Donovan Mitchell

The Charlotte Hornets and Washington Wizards are among the teams pursuing Donovan Mitchell, per @ShamsCharania pic.twitter.com/U5zOXQwWAO

Tony Jones and Shams Charania of The Athletic reported Tuesday afternoon that both the Washington Wizards and the Charlotte Hornets are among the teams pursuing the three-time NBA All-Star. Though the report also states that New York and Utah recently re-engaged on talks surrounding Mitchell.

“The Knicks and Jazz had a fresh trade conversation within the past week about potential packages for Mitchell, according to sources. There is no traction between the two teams on a deal, and no Mitchell trade is imminent for the Jazz, sources said. The Charlotte Hornets and Washington Wizards are also among the teams pursuing Mitchell, those sources said.”

Washington appears committed to building around superstar guard Bradley Beal, whom they recently inked to a gigantic five-year max contract. While the Hornets are hoping to build on an appearance in last year’s play-in tournament. LaMelo Ball was first-time All-Star for Charlotte in 2022 after winning NBA Rookie of the Year in 2021. Though the Hornets are now without a key player in Miles Bridges after he hit free agency and dealt with legal troubles.

Basketball fans on Twitter seemed intrigued by the idea of Mitchell landing in either city.

The backcourt of one of these teams if they get Mitchell… https://t.co/nXBqzJs9MP

Charlotte should do it https://t.co/ZdNl2uDzZF

Though he may have to play out the rest of that deal somewhere the way things currently look.