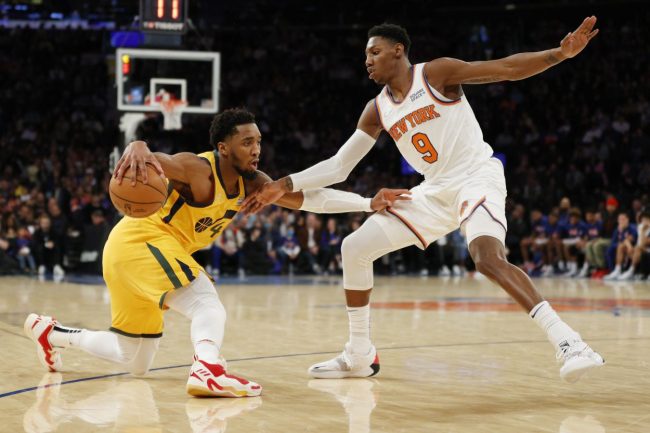 Things could be about to get really exciting in the Big Apple. It’s been a long time since New York Knicks fans had a team they could truly around, but that may be about to change. After landing rising star guard Jalen Brunson in free agency, New York could be on the verge of landing him a superstar backcourt partner.

The Jazz and Knicks have started discussions on a Donovan Mitchell trade, sources tell me and @Tjonesonthenba. New York has Utah’s focus currently, among interested teams.

Utah is in the process of a massive rebuild after trading All-Star center Rudy Gobert to the Minnesota Timberwolves. Mitchell initially expressed interest in staying in Utah, but that has since changed since the team has fully committed to the process of rebuilding. New York makes a ton of sense as a destination for the star guard. He’s a New York native and the Knicks have cried out for a superstar for a number of years. But other suitors also emerged for his services, with the Miami Heat being the name that seemed to come up the most.

ESPN NBA Analyst Bobby Marks also suggested recently that Mitchell could end up in New York, but with the Brooklyn Nets instead as part of a crazy four-team deal involving Kevin Durant, DeAndre Ayton, Ben Simmons, Myles Turner and more.

But Knicks fans want nothing more than for him to end up in Madison Square Garden, and Charania’s report on served as more reason to hype them up.

Waking up to this news is amazing…

Get it done, Knicks.

No excuses and no restrictions

THIS IS THE MOMENT TO GET YOUR STAR

With two 6-foot-1 guards, the Knicks may never defend the perimeter. But they’d be an extremely fun team to watch on the other end of the court.