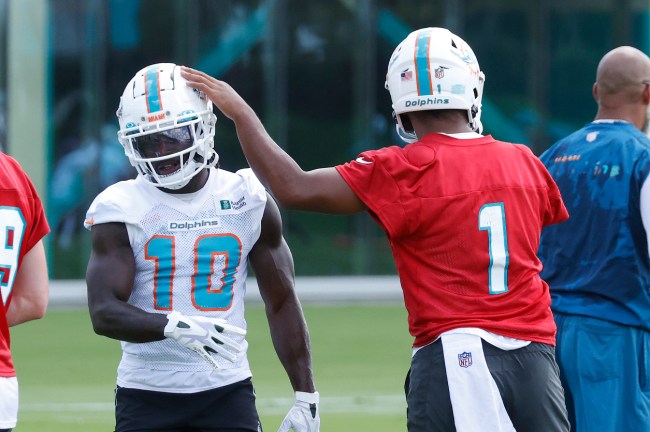 The Miami Dolphins look a lot different in the 2022 season. Yes, Tua Tagovailoa is still around, but there are a ton of new weapons on offense. The running back committee got an overhaul with Chase Edmonds, Raheem Mostert, and Sony Michel all coming to town.

But, most notably, the Dolphins landed superstar speedster Tyreek Hill in a massive trade with the Kansas City Chiefs.

The Tua-Tyreek duo has drawn quite the buzz over the past few months. Tyreek Hil is showcasing his unworldly speed with training camp under way and surprising his head coach (h/t Joe Schad of the Palm Beach Post).

Yes, Hill was clocked at 23 MPH! That’s the speed limit in a school zone in California, basically.

That is unreal speed, and new head coach Mike McDaniel gives Hill a hard time when he doesn’t run faster than everybody else.

We saw plenty of Tyreek Hill highlight plays in Kansas City, and now we can’t wait to see what it looks like in Miami.

Plus, the combination of Hill and Jaylen Waddle gives them two speedy playmakers on offense, and McDaniel and his staff will have a difficult time figuring out which one to use.

Nonetheless, Hill is impressive at camp, and that shouldn’t be a surprise.