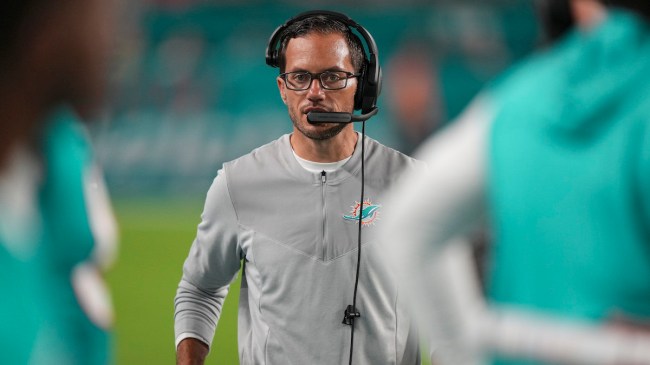 Expectations are high for the Miami Dolphins after the team added several key pieces this past off-season. But no matter how their season starts, new head coach Mike McDaniel is remaining optimistic.

Since joining the Dolphins in February, McDaniel has quickly become one of the NFL’s most exciting characters. The first-year head coach previously snapped back at reporters with a hilariously sarcastic response after being repeatedly questioned about Tagovailoa’s status for the preseason.

Ahead of the Dolphins’ season opener against the New England Patriots, McDaniel’s unique approach to dealing with media attention was out on display once again. It appears he isn’t all that concerned about the possible overreactions that may follow Week 1.

Mike McDaniel is ready for Week 2 either way 😅 pic.twitter.com/aE1Z1vLaJy

In true Mike McDaniel fashion, he was as blunt as can be when addressing the hype behind his team. It’s not complicated either. The Dolphins will have a chance to prove the doubters wrong on Sunday, but it’s not the end of the world if it doesn’t happen.

That said, Tua is entering his third year in the NFL and it’s likely make-or-break time for the former Alabama QB. The new additions of superstar wide receiver Tyreek Hill and new HC Mike McDaniel only add to the expectations fans have for the Miami squad.

While McDaniel isn’t concerned with reactions to the team’s first game, starting off with a loss isn’t ideal. The Dolphins are slight favorites over their AFC East rivals. Plus, the Patriots are no longer the powerhouse they once were.

Should they lose, bouncing back in Week 2 won’t be easy either. The team travels to face the Baltimore Ravens followed by a matchup against the Buffalo Bills. They could fall to 0-3 to start the season, so fans’ overreactions are understandable.

Assumptions coming after Week 1 shouldn’t hold too much weight anyways. McDaniel and the Dolphins have an entire season to find success after all.

The 49ers QB drama has begun… but not actually.https://t.co/RtsfOUaVP5

Either way, fans can continue expecting some awesome quotes from the Dolphins’ HC.