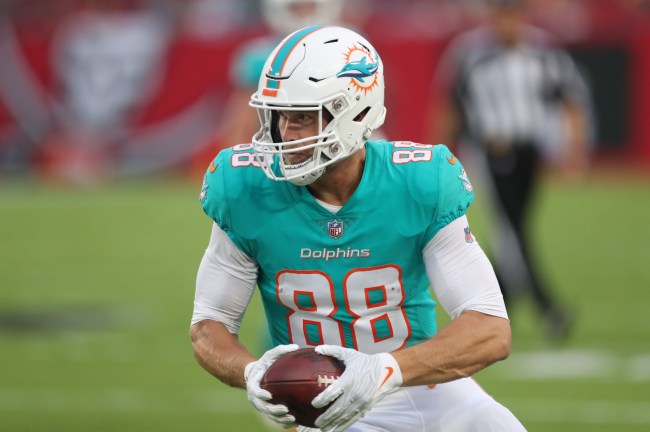 The Miami Dolphins seemed to confuse everybody when a rumor surfaced about tight end Mike Gesicki being on the trade block. Doug Kyed of Pro Football Focus listed Gesicki as a possible trade candidate as the preseason nears an end.

However, Dolphins’ new head coach Mike McDaniel shut down all of those talks shortly after (h/t Michael David Smith of Pro Football Talk). Actually, he didn’t exactly shut them down, but his comments were interesting.

“The report is misleading because there should be a lot of names on that report.”

So, McDaniel didn’t confirm nor deny those talks, instead saying others should be on that report. For what it’s worth, Dolphins insider Hal Habib mentioned that no trade is likely.

The Dolphins have not held trade talks involving tight end Mike Gesicki, according to a league source. This is contrary to a report from another outlet this morning.

As of now, no trade discussions have occurred. But could they? Perhaps, especially if they get hit with an out-of-this-world offer.

Gesicki and the Dolphins couldn’t agree on a long-term extension, so maybe they do consider moving him for some assets. The tight end had 73 catches (a career-high) and 780 yards (another career-high) but only scored two touchdowns. With Tyreek Hill and Jaylen Waddle expected to be the clear 1-2 options, Gesicki’s numbers probably take another hit.

Nonetheless, there is no Mike Gesicki trade imminent for now, although McDaniel didn’t exactly give a clear answer.