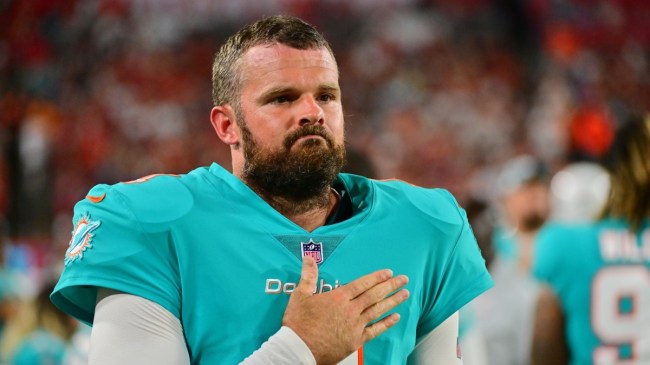 The Dolphins-Bills game was a bizarre contest. The game was played in intense Miami heat, and players were dropping like flies during the heat.

But, somehow, the Dolphins found themselves leading 21-17 after a late goal-line stand. But, they were backed up into their own end zone to punt the ball away in crunch time. What happened next will be on every single NFL bloopers reel forever.

Thomas Morstead is one of the most consistent punters in the NFL, and he has only had one punt blocked in 14 years. But, this was a tough situation to punt in, especially when his personal protector lost any sense of where he was on the field and backed up right into the punt.

THE PUNT GOES OUT THE REAR OF THE END ZONE! #FinsUp

The player who now has the most famous butt in the NFL is Trent Sherfield.

Not to worry, though. The Miami defense came up with an impressive stop against that potent Bills offense and the Dolphins hung on two win, 21-19.

They say that blocking punts hurts pretty bad. Imagine the pain Sherfield was in because he surely could not have been ready for it.

The Dolphins have not been great for awhile, and I bet most Miami fans thought they would find a way to lose the game after the butt punt.

If you’ve been around the Dolphins long enough, you know the shocking part of this game isn’t that Miami nearly lost because of a Butt Punt.

The shocking part is that they won in spite of it.

Morstead got hit revenge, though. He boomed the ensuing free kick and those extra yards kept the Buffalo Bills out of field goal range.