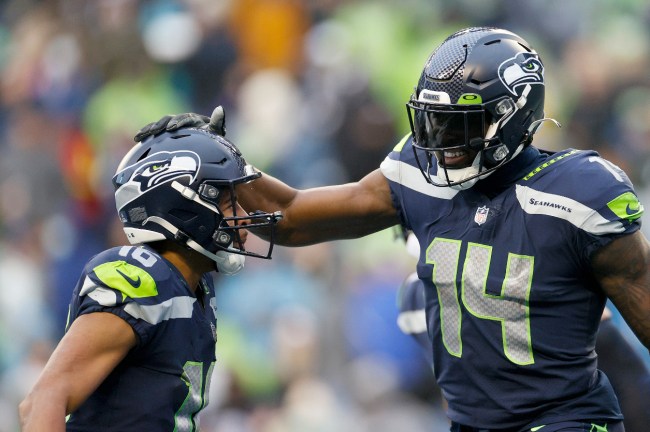 It is officially extension season. With training camp beginning across the NFL, we have seen several big-name players hold out hoping for a new contract. Deebo Samuel and Derwin James are still waiting for their paydays.

However, Seattle Seahawks wide receiver DK Metcalf won’t have to wait any longer. According to Adam Schefter of ESPN, the Seahawks are paying their young star WR a ton of money.

Seahawks’ WR DK Metcalf is signing a three-year, $72 million extension that includes $58.2 million guaranteed, per source. Deal includes $30 million signing bonus, the highest ever for a WR. Metcalf will be a free agent again at 27 years old.

That’s a ton of money, and it includes the highest-ever signing bonus for a wide receiver. We already saw Washington Commanders WR Terry McLaurin ink a new deal, and Davante Adams and Tyreek Hill both got massive contracts as well.

This came as terrific news for the Seahawks fans, and Metcalf himself took to Twitter and summed it up with one perfect gif.

The fans and analysts were right behind him celebrating, too.

$24M/yr extension is a very good deal. Love it. #Seahawks have a great young WR for the next four years (at a minimum). Love it. https://t.co/jwQgdHlIy5

smart to get that heavy guaranteed $ on a short deal when Drew Lock is throwing you open https://t.co/53VnMDYlaf

Dk got paid. And he can get paid again in 3 years. https://t.co/MSgq3u2qCE

When healthy, DK Metcalf is easily one of the best wide receivers in the league. But expectations are a little dim this year with Geno Smith and Drew Lock battling it out at the QB position. The departure of Russell Wilson is a massive one, and we will see if it ends up hiring Metcalf as much as people think.

Still, the Seahawks wasted no time getting a deal done, and Metcalf will be a free agent in a few years.