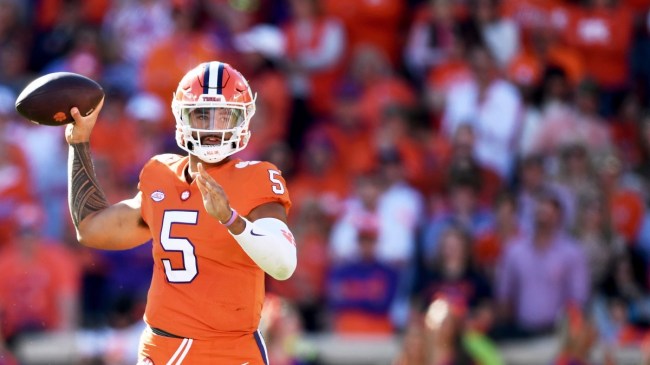 DJ Uiagalelei was supposed to be the next in line of great Clemson quarterbacks. Few programs, if any, had a better three quarterbacks than Tahj Boyd, Deshaun Watson and Trevor Lawrence in the last decade. And, DJ was supposed to be as good or better than all of them. The five-star out of St. John Bosco in Southern California had all the tools. He had as big of an arm as any prospect in recent memory, threw an accurate ball, and could run, too.

And, in his freshman year he looked incredible filling in for Trevor Lawrence. Lawrence had to miss the Notre Dame game that year due to Covid protocols. He was 29-44 for 439 yards and two touchdowns in the 47-40 overtime loss. In fact, he threw 5 touchdowns on 117 attempts and not interceptions.

But, things did not go to plan. He struggled through the 2021 and 2022 seasons, and was benched for Freshman Cade Klubnik in Clemson’s 39-10 ACC championship win on Saturday.

Now, he has made a decision about his future.

Dj Uiagalelei is going to enter the transfer portal

On Sunday evening, news broke that he was going to enter the transfer portal.

Official: DJ Uiagalelei and EJ Williams both announce they will enter the transfer portal

EJ Williams is a former top-100 overall player in his recruiting class and will help some team at wide receiver. But, the attention is on Uiagalelei. Some team is going to get a quarterback with nearly unlimited potential and great tools. The scheme at Clemson is known to be very bad, and they certainly did not design things to his strengths.

To complicate matters further, DJ’s younger brother, Matayo, is a five-star defensive end in the 2023 class who has not committed anywhere yet. They could certainly try to play together.

More big-name quarterbacks will be entering the portal soon, I’m sure.