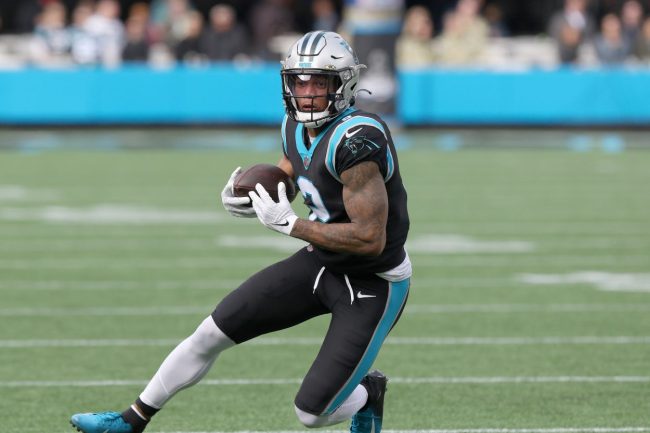 Carolina Panthers wide receiver DJ Moore had established himself as one of the top wide receivers in the NFL over the last three seasons. Despite Carolina’s (we’ll call it shaky) situation at quarterback in recent years, the Maryland product has been remarkably productive. Moore has hauled in 246 catches for 3,525 yards and 12 touchdowns in that span and has proven a headache for opposing defensive backs.

Now, the Panthers’ star can add another label to his resume: peacemaker.

Two fans at Panthers fan fest looked like they were about to get into a fight…and then Panthers star WR DJ Moore steps in and calms the situation down to break things up.

Carolina hosted its annual Fan Fest at Bank of America Stadium on Thursday night. The event features an open practice following the team’s return from Sparatanburg, South Carolina where it holds training camp.

At this year’s event, a pair of fans appeared to get a little to rowdy and sparked and altercation that nearly resulted in fists flying.

That’s when Moore stepped in.

The Philadelphia native came up into the stands, stood on a railing and calmly (but firmly) talked both of the fans down and prevented what could have easily been an ugly scene.

Moore has proven the hero for the Panthers numerous times since being drafted with the 24th pick of the NFL Draft in 2018. Now, he’s doing it again.

Carolina and head coach Matt Rhule will be counting on the star wideout to show that kind of poise on the field in 2022. As will either Sam Darnold or Baker Mayfield as the two battle for the starting QB spot.

You can see the Commanders vs. Panthers for $1 (plus fees)https://t.co/ehxRqZe6Yf

For now, let’s Moore can get back to focusing on football and not having to play the role of security.