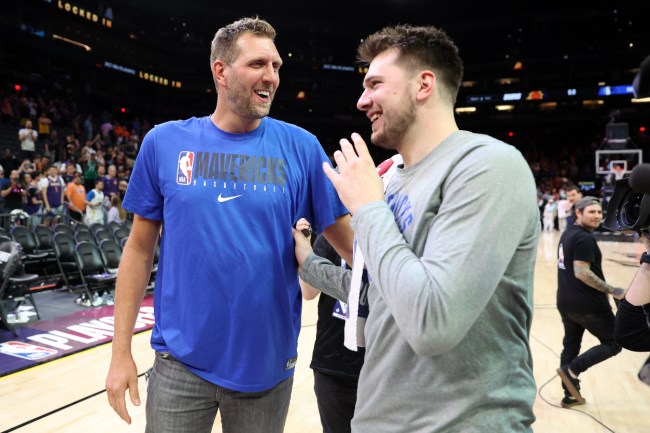 Doncic has been playing for his home country of Slovenia during the offseason in the FIBA World Cup Qualifiers and has been putting on an absolute show.

Slovenia defeated Sweden and Doncic dropped 31 points as he looks to be in terrific shape during the NBA offseason.

Doncic drops 31 as Slovenia pips Sweden in a thriller! 🇸🇮

However, earlier in that same game, Dirk had some fun teasing Luka.

In the first quarter, Luka stepped to the free-throw line, and the crowd chanted “overrated.”

He didn’t seem to care and was laughing about the entire situation. Of course, what made it even funnier was that Dirk was joining in on the fun.

Dirk Nowitzki going full fan-mode and joining in on the "overrated" chants to Luka Doncic 😂pic.twitter.com/zXOASTZIT4

Dirk is just having a good time, and Doncic got the last laugh with another masterful performance with a victory over Sweden.

For what it’s worth, he has been putting on a masterclass of highlights the entire time.

Luka Doncic ( @luka7doncic ) is back playing for Slovenia making crazy passes and sidesteps 😳😂 they’ll be competing in the @fibawc qualifiers #FIBAWC #WinForAll pic.twitter.com/9RVoqJgz62

Obviously, Dirk doesn’t think Luka is overrated, and the Mavs stars — past and present — enjoyed each other’s company all the more.