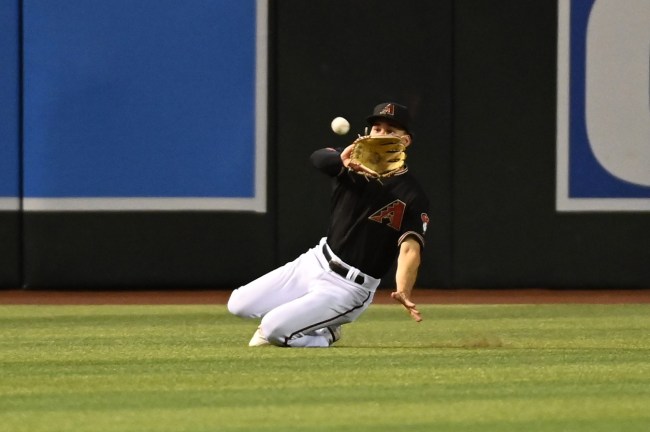 The Arizona Diamondbacks are having some fun even while being one of the worst teams in the National League. Last week against the Cincinnati Reds, rookie Alek Thomas made a gorgeous home run-robbing catch that left pitcher Merrill Kelly in amazement.

Reds slugger Joey Votto smashed the ball, but Thomas came down with it.

Kelly’s face says it all — stunned.

Well, the Diamondbacks pitcher gave Thomas a sweet reward for making the play.

Kelly walked into the locker room and boom, presented Thomas with a nice gift, according to Zach Buchanan of The Athletic.

Inside, Thomas learned later, was a Louis Vuitton backpack that retails for more than $2,000. Thomas had needed a new bag, but this wasn’t charity. This was gratitude.

That’s a nice gesture by Kelly, and Thomas also stated that he was hoping for a new bag. Well, he got one, and a $2,000 Louis Vuitton bag, at that.

Perhaps Thomas should rob more home runs with Kelly on the mound going forward. After, all, the rookie is known for his stellar defensive play despite struggling at the plate.

If this is the first gift, who knows what might come the next time the rookie outfielder makes a sweet play.