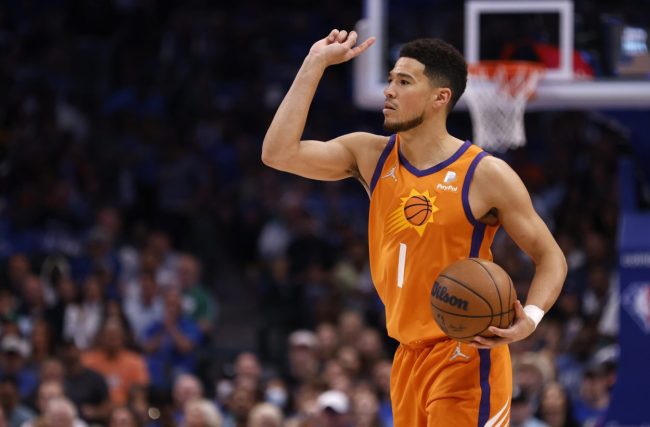 Devin Booker is everywhere in the news these days.

The Phoenix Suns superstar led his team to the NBA Finals in 2020-21. He made First-Team All-NBA in 2021-22. He’s reportedly the reason Kevin Durant wants to play in Phoenix, and he’s the cover athlete for NBA 2k23.

That last point seemed to not sit so well with NBA fans on Twitter. Fans across the league felt like Booker wasn’t a worthy cover athlete.

All these insane cover artworks for 2k23 and they decide to go with Devin Booker 💀😭 pic.twitter.com/v2j7pt8HJO

2K chose Devin Booker as their new cover athlete and I’m begging them to make the right decision and use this picture pic.twitter.com/lPTlw4FlD8

Phoenix Suns fans quickly raced to the defense of their star player.

Devin Booker carried the team with the best record in the league as the number one scorer averaging 25/5/5 ending up 4th in the MVP race and landing a spot on the First Team All NBA.

But yeah, he shouldn't be the cover of 2k23 cause he punked your favorite team.

CRY ME A RIVER.

Eventually, Booker himself seemed to have enough of the haters and chimed in on his own behalf.

all that hate why you ain’t tired

Booker’s exasperation is understandable. He’s unquestionably been one of the league’s best players over the past two seasons and has turned the Suns from a joke into one of the league’s most formidable franchises. But it also seems a bit silly he’d be bothered by such things.

After all, life is pretty good for him these days.

The Phoenix Suns and All-NBA guard Devin Booker are finalizing a four-year, $214 million supermax contract extension that he’s set to sign as soon as next week, sources tell @TheAthletic @Stadium.

Booker will also be the cover athlete for NBA 2K23, per sources.

Haters aside, it’s a pretty good time to be Devin Booker. Things may get even better if the Suns can work out a trade for Durant and Booker becomes positioned to win his first NBA Championship.

For now though, he’s stuck firing off cryptic tweets that we’ll continue to ascribe meaning to.