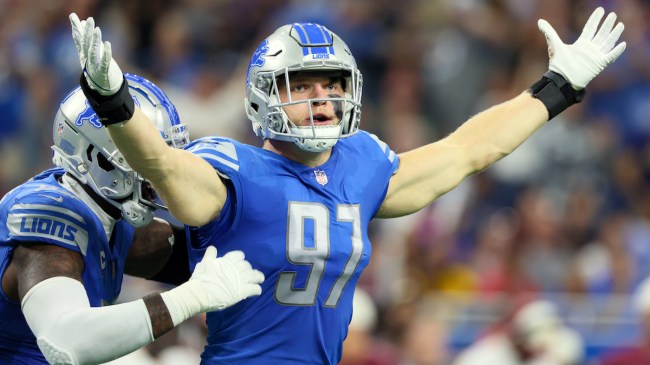 The Detroit Lions are looking solid in their second year under head coach Dan Campbell, notching their first win of the season over the Washington Commanders on Sunday.

It was a thrilling matchup that saw the Lions hold off a second-half comeback from Carson Wentz and the Commanders. Amon-Ra St. Brown stole the show as he continued to light up NFL secondaries with 116 receiving yards, 68 rushing yards, and 2 touchdowns.

The Lions didn’t get a win until Week 13 last season, so 2022 is clearly off to a better start. The team was continuing to relish in their victory on Monday, even taking to social media to poke fun at the Commanders over their hilarious coffee mug incident.

In case you missed it, the Commanders went viral for selling coffee mugs featuring their logo in front of the state of Washington earlier this week. Mind you, the Commanders reside in Washington D.C., which is quite literally across the country from Washington State.

While it was later confirmed that the mugs were sold outside the stadium and not by the team themselves, it didn’t stop fans from roasting the sad state of the franchise.

It appears the Detroit Lions’ social media team has taken some inspiration from the viral moment. In celebration of Victory Monday, they tweeted out their own version of the mug. It still featured the same ‘W’ logo, although meant to denote their win, but included the state of Michigan instead.

That Victory Monday coffee surely hits different and so does this clever bit of trolling. The internet was loving it and that includes Commanders fans.

As a secret commanders fan. This is the most underrated tweet of the day. 😂😂😂😂

It doesn’t happen often but the Lions took several Ws this weekend. Even if the season goes downhill, fans will have amazing troll jobs like this to look forward to.