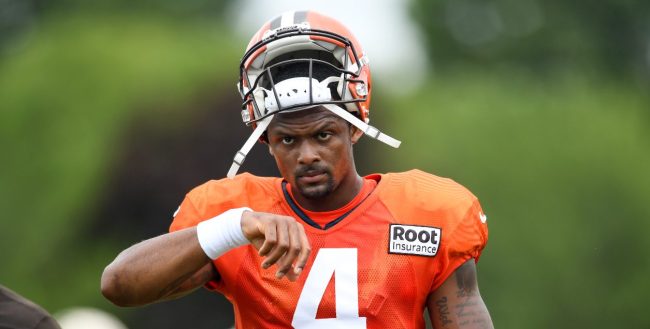 The NFL has now officially changed the suspension for Cleveland Browns quarterback Deshaun Watson. After a mediocre six-game suspension, they went back to the drawing board and have now decided: It is 11 games for Watson, according to Josina Anderson of CBS.

Watson now gets 11 games and a $5 million fine, which is a significant bump from his previous suspension. However, there is an interesting wrinkle in this suspension.

He will return for Week 13. The Browns’ opponent for that week?

You guessed it: The Houston Texans.

BREAKING: The NFL and NFLPA have reached a settlement in the Deshaun Watson case: Watson is suspended 11 games and will receive a $5 million fine. Watson will also undergo a treatment program.

Watson will return vs. the Texans, his former team, in Houston.

You can’t make this stuff up. Baker Mayfield will face his former team in Week 1 with the Carolina Panthers, and Watson will make his regular-season debut for the Browns against his former team.

Fans took notice of this development of the NFL deciding to have Watson return against Houston, which sure seems like an odd coincidence.

Lol… the NFL is wild… shows exactly what they about… 11 games just happens to fall on the game where Deshaun comes back to Houston and the storylines are the highest it can get when he returns… https://t.co/iYa3rxhppq

that means first game back is in Houston. That feels weird, NFL https://t.co/0AkSQ1wtxD

First game back at Houston NFL knows what they doing 😂😬💰💰 https://t.co/TP3lDFwdEP

At Houston as Deshaun Watson's first game back seems even more offensive than the 6 games jesus https://t.co/GUJ1DprCyF

I guarantee you that the NFL suspended Deshaun Watson for 11 games, not 12, because they wanted him to face the Texans in the first game back. They know that game is going to be national news and they want the spotlight. The NFL only cares about their bottom line.

So, there you have it. Deshaun Watson is out for 11 games and will return against the Texans…in Houston. We can only imagine what the response will be for Watson against his former team, one in which he left a sour taste in their mouths.

Jacoby Brissett figures to be the starter for Cleveland unless they end up trading for Jimmy Garoppolo. Either way, the Watson suspension is finalized once and for all.