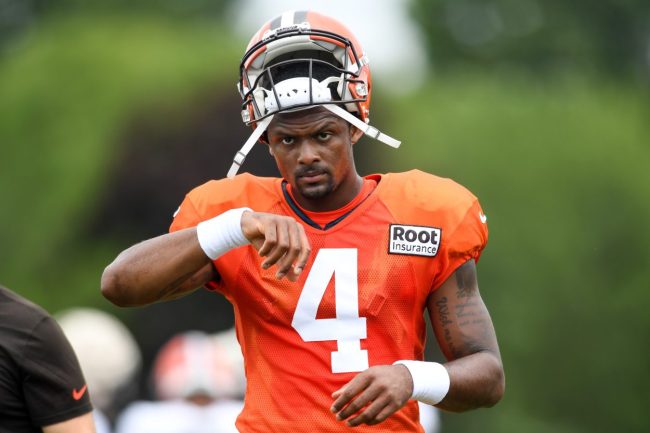 The NFL is currently in the process of appealing the six-game suspension handed down to Cleveland Browns quarterback Deshaun Watson. Watson’s suspension was a result of a league investigation into more than 20 accusations of sexual harassment and assault.

Watson likely wouldn’t be willing to accept that lying down. What he will accept, supposedly, is a pretty lengthy suspension and a gigantic fine to go with it.

Watson Willing To Miss Eight Games In Settlement With The NFL

Tom Withers and Rob Maadi he Associated Press reported late Thursday night that Watson and his representation would be willing to accept an eight-game suspension and a $5 million fine.

Watson is facing a potential year-long ban for sexual misconduct

“Watson, who is facing a potential year-long ban for sexual misconduct, would agree to a lesser penalty in a settlement, said the person who spoke on the condition of anonymity because of the sensitivity of the case.”

The news raised the eyebrows of many around the NFL, including NBC Sports’ Mike Florio, who feels the settlement offer is “too little, too late.”

“It’s entirely possible that Harvey is putting the finishing touches on a written ruling that will suspend Watson for at least one full season, effective tomorrow. Watson’s sudden willingness to make a significant proposal comes at a time when it’s increasingly obvious that Harvey will be doing what Commissioner Roger Goodell wants — dropping the hammer on Watson.”

A ruling on Watson’s suspension is expected in coming days and many, including Florio, believe the NFL will get the suspension it first sought.

The Cleveland Browns may not be finished in the trade market if that turns out to be the case.