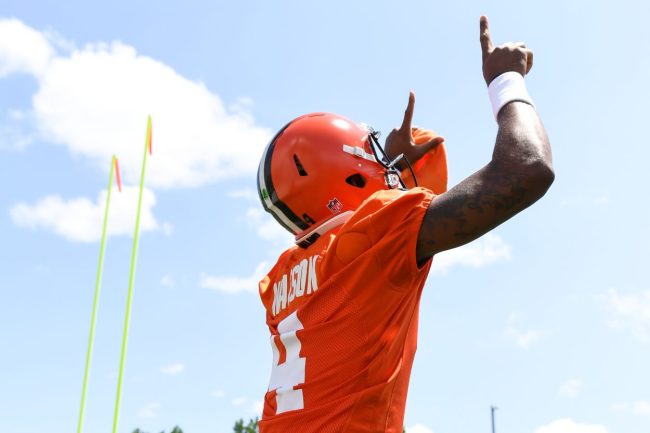 That’s the punishment for Cleveland Browns quarterback following dozens of accusations of sexual assault that have followed him for the better part of the last year.

#Browns QB Deshaun Watson has been suspended for the first six games of the 2022 season by jointly appointed disciplinary officer Sue L. Robinson, per sources.

The NFL has three days to file an appeal, which would be heard by Roger Goodell or his designee. pic.twitter.com/NS6Yr14qLx

Watson will face no additional fines, though he will have to receive all his massages from the Cleveland Browns’ team massage therapists.

No additional fine for Deshaun Watson, per source. https://t.co/jBktmH3LoS

The suspension is significantly less than the reported ban of at least one year that the NFL was seeking. Though the NFL could still appeal the ruling.

So the discipline for #Browns QB Deshaun Watson, pending a possible NFL appeal:

Sue L. Robinson’s decision also requires no massages other than directed by club personnel and no adverse involvement with no law enforcement.

"It's just like a big screw you, that's what it feels like. That we don't care. He can run and throw, and that's what we care about."

"It was sick to me…I felt like he's being rewarded for bad behavior."

“It’s just like a big screw you,” they said. “That’s what it feels like. That we don’t care. He can run and throw, that’s what we care about about.”

“It was sick to me…I felt like he’s being rewarded for bad behavior.”

Watson’s six game suspension is the same that Ezekiel Elliott faced from the NFL in 2017 amid accusations of domestic violence. Though Elliott had just one accuser and lead NFL investigator Kia Roberts reportedly suggested no suspension in that case.

NFL fans are struggling to understand how the two cases resulted in similar punishments.

That’s fucking ridiculous Ridley is suspended a WHOLE season for gambling a game he didn’t play in. Zeke was suspended 6 games for something even the police said he didn’t do anything. Yet Watson has 20+ women come out for SA and he gets 6 games what a fucking joke https://t.co/BWH3wioAEW

Sean Payton got suspended for a year for Bounty Gate.

If we’re REALLY going by precedent here, then Watson should get suspended 24x what Zeke and Big Ben got. The @NFL just showed us how they really feel about women. https://t.co/oqjVOs4dkf

I’ll remind people that Zeke Elliott was suspended six games for “behavior unbecoming” connected to a trial about an incident that occurred in COLLEGE, in which he wasn’t even indicted. So… https://t.co/eU9kOAcaJH

The ruling’s came down from different governing bodies, but the league still has the power to appeal the ruling and it would not be overly shocking to see it do so. For now, it seems that outside of Cleveland Browns fans, those around the league can’t seem to understand how the judge arrived at this number.

The current suspension puts Watson on track to return in Week 7 against the Baltimore Ravens.