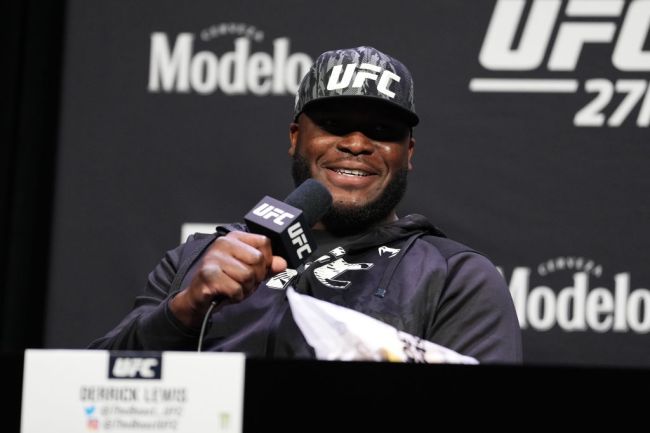 Derrick Lewis and Sergei Pavlovich are set to face off in the Octagon at UFC 277 on Saturday. And yet, Lewis still doesn’t have a clue who his opponent is.

The UFC record-holder for most knockouts is also known as one of the funniest guys in the UFC. Over his 17-7 UFC career, Lewis has delivered countless entertaining sound bites, including a hilarious response to Tai Tuivasa’s gross UFC 271 request.

Pavlovich, on the other hand, is a rising prospect in the heavyweight division with a 3-1 UFC record. The Russian fighter has won his last three fights via first-round knockouts, but clearly, Lewis hasn’t been paying attention.

During media day for UFC 277, Lewis was asked whether he knew who he was fighting this weekend. His response came in true Derrick Lewis fashion, giving the reporter a sly yes before going on to ask for a reminder of his opponent’s name.

It appears UFC 277 isn’t weighing too heavily on Lewis’ mind. He wasn’t afraid to call everyone else out on not knowing the Russian fighter either. For what it’s worth, at least he remembered Pavlovich’s last initial.

UFC 277 media day featured plenty more jokes from Lewis. He even shared plans should he win the $1 billion Mega Millions jackpot, while throwing light jabs at the MMA media. It really doesn’t get more Derrick Lewis than that.

Fans will have to tune in Saturday to see whether Lewis has actually done the homework on his next opponent. He might even surprise everyone and remember Pavlovich’s name in the post-fight interview. Who knows?

Either way, UFC 277 will be epic. Julianna Pena and Amanda Nunes headline in a Bantamweight championship rematch, while Brandon Moreno and Kai Kara-France meet for the interim Flyweight title in the co-main event.