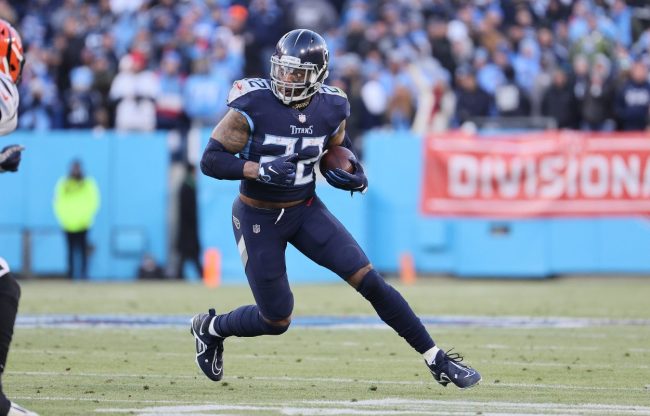 He leads the NFL with an incredible 4,504 yards and 43 touchdowns in that time span, despite only playing eight regular season games in 2021 due to a broken bone in his foot.

Henry’s incredible performance earned him an impressive 97 overall rating in EA Sports Madden NFL 23 and 93 speed rating. But now that rating may need to get decreased a little bit.

Henry embarrassingly lost a foot race at Tennessee Titans training camp on Wednesday morning to one of his biggest fans.

That fan just so happened to be Henry’s two-year-old daughter Valentina, who left the gargantuan running back in the dust. Honestly, it’s a pretty embarrassing loss for Henry and it’s hard to see how he’ll ever regain his confidence.

Not only did Valentina toast Henry in the race, she also then asserted her dominance by insisting that he lift her up and parade her around the Titans’ practice facility as the winner. Tennessee head coach Mike Vrabel presumably then came over to talk to the young superstar about her new role and how she fits the offense in 2022.

In all seriousness, football fans across the world are likely to see a happy, healthy Henry back on the field in 2022 after a difficult 2021 season.

With AJ Brown on the door, the running back’s work load could be even heavier than ever. It’s good to know he’ll have some competition along the way from Valentina, as well as a ton of moral support.