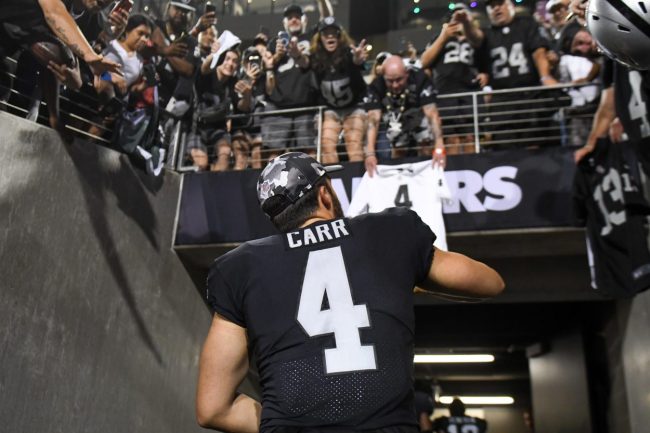 Derek Carr has quietly been one of the better quarterbacks in the NFL over his eight years in the NFL. The Las Vegas Raiders quarterback in a three-time Pro Bowler and just last year he threw for a career-high 4,804 yards to go along with a 23 touchdowns and 14 picks.

The expectations for Carr are even higher this time around after Las Vegas added Davante Adams, his college teammate and one of the best wideouts in the NFL, to the mix.

Carr didn’t play in the Raiders first preseason game against the Jacksonville Jaguars for precautionary reasons, but if reports out of training camp are to be believed, he may not need to. Tashan Reed of The Athletic reported Tuesday that Carr has not thrown a single interception thus far in training camp. The news comes on the heels of the silver and black QB throwing a career-high 14 interceptions a year ago.

“Derek Carr has looked really sharp throughout training camp. I haven’t observed him throw any interceptions and it’s clear that his chemistry with receiver Davante Adams hasn’t gone anywhere.

Carr has already proven himself to be one of the better quarterbacks in the league, but it’s still impressive to see how quickly he’s adjusted to learning yet another new play caller and offensive scheme.”

Adams, like Carr, sat out the Hall of Fame game for precautionary reasons after going through warmups. Though Vegas still route the Jacksonville Jaguars, 27-11.

If the Raiders are planning on trading Josh Jacobs, head coach Josh McDaniels sure doesn't seem to know about it. https://t.co/bVWi2ODWNq

Carr also appears to be adjusting to new head coach Josh McDaniels’ offensive system. If he and Adams get going, along with star running back Josh Jacobs, the Raiders could be business.