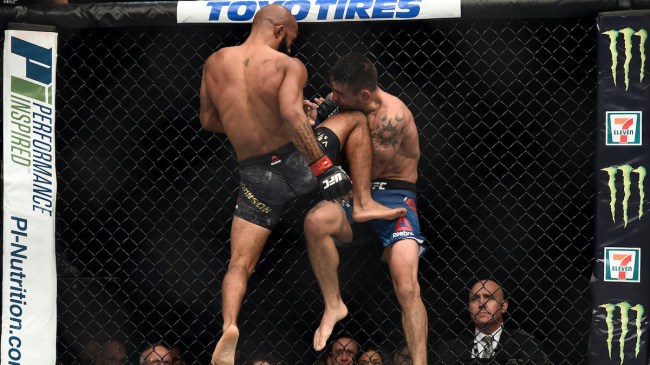 Demetrious Johnson is widely considered the greatest flyweight in combat sports history. Following his departure from the UFC, “Mighty Mouse” has now found himself atop the ONE Championship.

“Mighty Mouse” got his revenge on Friday in a rematch for the ONE Flyweight World Title and did it in a familiar fashion. In the 4th round, he made Moraes falter with a punch before landing a vicious flying knee to put his opponent out cold.

AND NEW! 👑 @MightyMouse 🇺🇸 wins the ONE Flyweight World Title with a walk-off KO of Adriano Moraes!@PrimeVideo #ONEonPrimeVideo1 #ONEChampionship pic.twitter.com/A3G9dlesyw

It’s the type of knockout you can just watch on repeat endlessly. Plus, it’s even better knowing Johnson was on the receiving end of a similar move less than two years ago.

“Mighty Mouse” claimed his first ONE Flyweight World Title with the knockout, moving his record within the promotion to 4-1. It seems Johnson keeps getting better with age and the 36-year-old’s move left fans absolutely stunned.

Holy shit DJ brings the violence! That was NASTY! Mighty Mouse gets his revenge. #ONEonPrimeVideo1

Current UFC flyweights should be glad DJ is gone. Man was so dominant they were gonna rid of the division😂. 100% Top 3 MMA GOAT #ONEonPrimeVideo1

Even former UFC Flyweight and Bantamweight Champion Henry Cejudo, who beat Johnson via split decision in 2018, was impressed by the crazy knockout. He was so excited that he actually woke up his baby on accident.

Demetrious Johnson holds the UFC record for most consecutive title defenses with 11, so he’ll look to bring that same success to the ONE Championship. But first, he’ll have to defeat Moraes again in a trilogy fight to settle the 1-1 score.

Given how the first two bouts have gone, is it too much to ask for one more flying knee knockout?