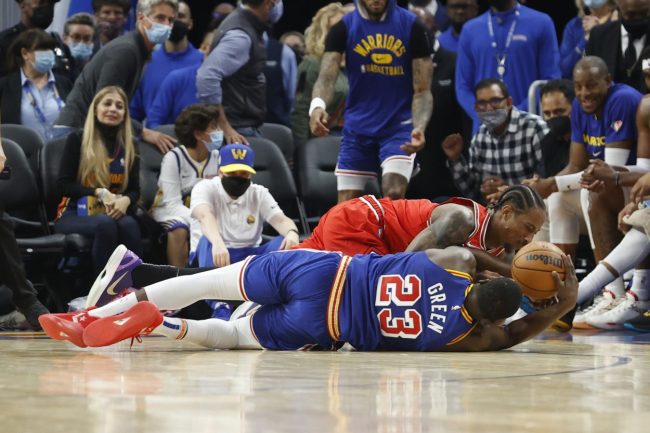 DeMar DeRozan had one of the best years of his career this past season with the Chicago Bulls. The five-time NBA All-Star joined Chicago in free agency and proceeded to put up career-best numbers in scorin (27.9 points per game), and shooting (35.2 percent from deep).

Before injuries to Lonzo Ball and Zach LaVine derailed Chicago’s season, the Bulls were looking like one of the biggest surprises in the NBA led by their newfound big three.

But if it were up to Draymond Green, that never would’ve happened.

DeRozan went on Green’s podcast and discussed a number of topics including his participation in the Drew League, his time with the San Antonio Spurs and joining the Bulls in free agency. That last part was when things got interesting.

DeRozan says a lot of options fell apart, including a potential move to the Lakers. He added that there were certain moments where he had “no fu*king clue” what he was going to do.

“Then the conversation turned to like, ‘yo come to the Warriors,'” Green said about discussions he and DeRozan had. “And you’re like ‘fu*k no, I’m not coming there. I’m not coming to play with y’all.'”

Draymond Green tried recruiting DeMar DeRozan to the Warriors during free agency in 2021.

Both Green and DeRozan cracked up while recalling the conversation which takes place shortly after the 29-minute mark of the clip below.

DeRozan’s decision seemed to work out well for all parties. Green and the Warriors did win another championship, but DeRozan became a leader of one of the league’s most up and coming teams.

Green’s currently under contract for two more years with Golden State and appears to be in a tenuous situation. Who knows, maybe it’ll be DeRozan returning the call to recruit him to the Bulls by then.