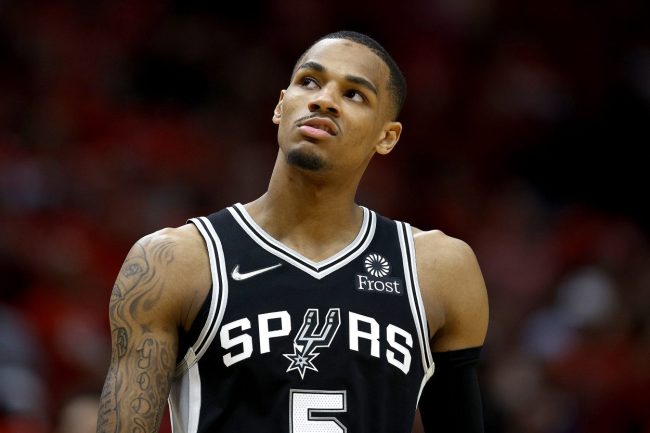 Rumors have swirled around San Antonio Spurs rising star Dejounte Murray for much of the NBA offseason.

First he was connect with the Atlanta Hawks, then there was smoke surrounding the always interesting New York Knicks.

Ultimately, the Hawks offer won out.

The Spurs sent the 25-year-old point guard to Atlanta for a package surrounding Danilo Gallinari and a whole boat load of NBA Draft picks.

The Hawks are sending a 2023 first-round pick via Charlotte, and their own 2025 and 2027 first-round picks to the Spurs in the deal, sources tell ESPN. Spurs will also get a pick swap in 2026.

The 2025 and 2027 first-rounders are unprotected ATL first-round picks, per league source. https://t.co/6M1PAaCfQ8

The move gives the Hawks another All-Star to put next to burgeoning superstar Trae Young. But the fit is a bit questionable. Murray has shown to do his best work with the ball in his hands, similarly to Young, and shot just 32.7 percent from beyond the arc last season. That number rose slightly to 34.5 on catch-and-shoot 3-pointers.

Meanwhile, San Antonio gets a superstar haul back. Gallinari is a prime candidate for either a deadline trade our a buyout. The picks could be huge as the Spurs look to rebuild. They’ll have massive cap space moving forward and a small fortune of draft capital.

Fans of both teams seem to dig the move.

Gave up Murray at his most potent price, hard to swallow, but the haul will create a future foundation for this team. We’re now in rebuilding mode folks

good for the spurs. good trade for them. they were gonna stay in perpetual mediocrity. now they can fully rebuild and did murray a favor.

Lmao naah Trae and Murray go be madness! It’s over for Miami😂😂😂😂 https://t.co/uTHh2fwR1i

And Young seemed overjoyed to add another budding star in Atlanta.

This 💩 just got real

Only time will tell which team, if any, will come away as a winner from the trade. But Atlanta just got far more interesting, as did the Spurs future.