Colorado’s Deion Sanders Has Made a Shocking Decision About Recruiting 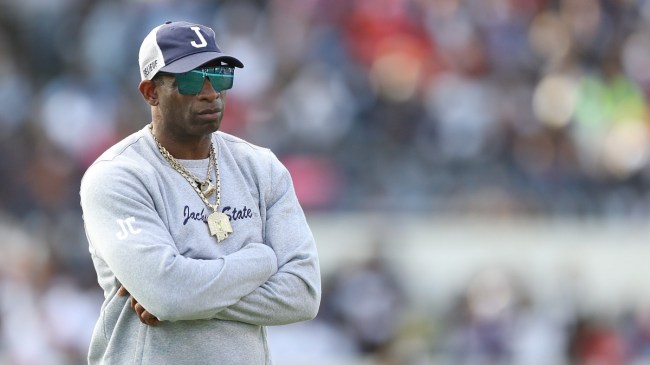 The college football world cannot look away from Deion Sanders and his new job as the head coach at Colorado. Coach Prime is coming off a 12-0 season at Jackson State and got the top overall player in the 2022 class, Travis Hunter, to sign at the HBCU.

Part of the intrigue is the amount of roster turnover needed. To put it simply, Colorado stinks. They went 1-11 this year and might have the least amount of talent of anyone in the P5. Former coach Karl Dorrell ran that program into the ground, and there just isn’t a lot of PAC 10 talent there.

Of course, there were recruits already committed to the Buffaloes before Deion took the job. But, Sanders has made a choice on what to do with them.

According to a report by Dnvr, Prime will not be honoring the commitments of verbally committed recruits.

Coach Prime’s staff will not be honoring any commitments from players recruited under last year’s staff.

A brand new era of CU Buffs football is on the horizon.

Some are alarmed by this, but it’s completely legal. After all, it’s just a verbal commitment. National Letters of Intent, a binding document for both the school and the recruit, cannot be signed until later this month.

Still, it’s not ideal for those that had committed.

Ugh. On one hand, I get it. OTOH, this makes me want to🤮. So rough on these kids

But, at the end of the day, this is a dog-eat-dog business. Coaches are fired for not winning all the time. That makes them have to make tough choices like this, and I can’t blame Deion for doing it.