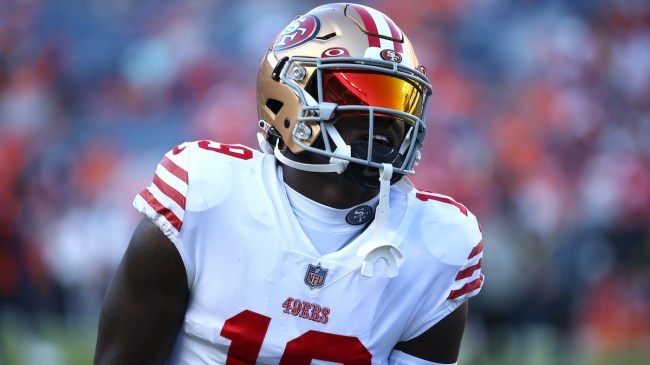 The Jordan Brand endorses a number of top athletes across a variety of sports and the Jumpman family just added another NFL superstar to its already impressive roster.

On Wednesday, the 49ers ‘wide back’ announced that he had agreed to a deal with none other than the namesake brand of NBA legend Michael Jordan.

Deebo is the latest NFL player to join the Jumpman family and it’s something he’s always hoped for. The 49ers star described it as “a dream come true to be a Jordan Brand athlete” after having always wanted Js as a kid (h/t Tom Dierberger of NBC Sports).

He also shared a hilarious story about how his fellow 49ers teammates reacted. It seems some are wishful that Deebo will share the perks of the new deal. You can’t blame them for trying at least.

“It’s funny because guys all the time in the locker room are asking me, ‘How did you get that done? Put me in contact with someone.’ Or they’re asking if they can get some of my gear when I get a package.”

It isn’t just a meaningful accomplishment for the 49ers WR. He also understands how impressive it is.

Deebo is the 7th NFL receiver to join the Jordan Brand. Davante Adams, Chase Claypool, Stefon Diggs, Jarvis Landry, Sterling Shepard, and Michael Thomas are the others already on the roster.

While he’s already been sporting the Jordan cleats and gloves this season, fans can witness Deebo’s debut as a Jumpman athlete on Monday against the Los Angeles Rams. The Niners will certainly hope he can continue to translate his recent personal success into more success for the team.