Does 49ers’ Deebo Samuel Regret Requesting For A Trade This Offseason? 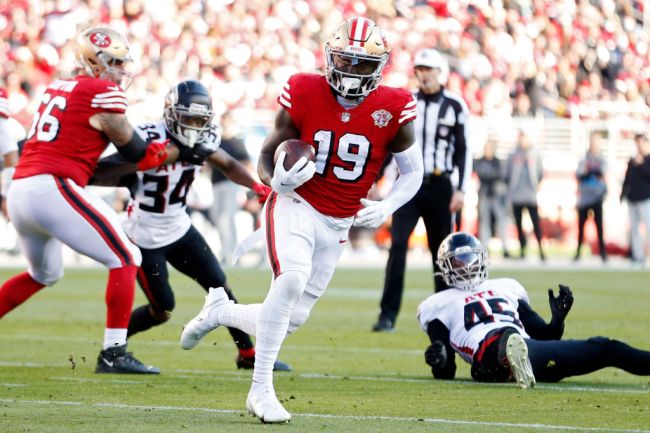 The Deebo Samuel and San Francisco 49ers trade drama finally came to a close over the weekend. While 49ers fans may not have appreciated the uncertainty brought on by his trade request, Deebo thought otherwise.

Back in April, the wide receiver/running back extraordinaire made huge news by requesting a trade from the Bay Area football team. It shocked the 49ers Faithful with many not expecting him to wear the red and gold uniform next season.

But as training camp ramped up, Deebo put all the rumors to bed by inking a new, three-year deal with the San Francisco 49ers. The extension for $73.5 million also includes generous cash incentives should he continue as a running back.

Even after ultimately deciding to stick around, Deebo doesn’t actually regret requesting a trade. It’s simply business in his eyes.

While a trade request is typically one of the easiest ways to burn bridges, that’s not what happened with the San Francisco 49ers and Deebo Samuel. If anything, it was the opposite with things clearly working out. So why should he have any regrets?

With the amount of offensive production he provided, both in receiving and rushing, the man deserved to get paid. He knows the NFL is a business at the end of the day. So you can’t blame him for putting his own best interests first.

As for why Deebo requested a trade, it’s not related to the 49ers’ “wide back” position like many thought. If it weren’t evident enough by the incentives in his extension, Deebo is still very much open to running the ball.

Despite the offseason rumors, Deebo still loves the “wide back” role pic.twitter.com/fUX1NXJUEW

The 2022 season is just around the corner and there’s plenty for the 49ers Faithful to get excited about. Unfortunately for NFL defenses elsewhere, Deebo will be looking to continue his dominance in rushing and receiving. And it appears the Trey Lance to Deebo Samuel connection is improving with each day.

The chemistry between Deebo and Trey is improving 📈 pic.twitter.com/8fgVKWkMTc

Last year, the San Francisco 49ers finished the regular season with a 10-7 record before losing to the Los Angeles Rams in the NFC Championship. Now that they’ve got a new quarterback and a newly paid “wide back,” the 49ers will be looking to prove themselves as Super Bowl contenders once again.