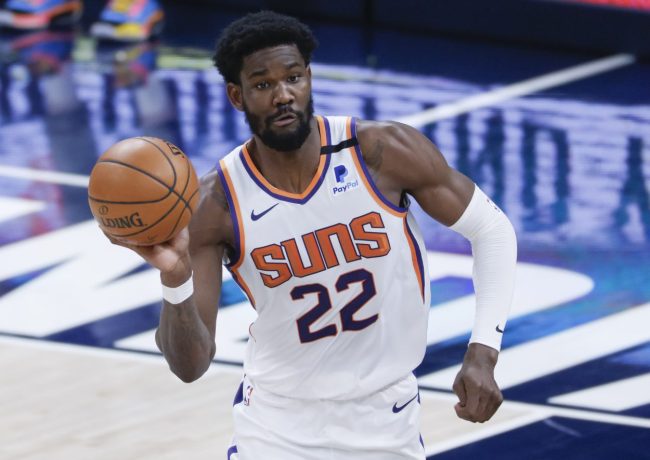 The Phoenix Suns appeared to be sitting pretty. Phoenix is reportedly one of if not the preferred destination for Brooklyn Nets superstar Kevin Durant. Budding superstar Devin Booker was named as the cover athlete for NBA2k23, and the Suns were recently named the favorite to win the 2023 NBA Championship according to bedding odds.

Now that may all being going out the window. Except the Devin Booker thing, of course, that stays.

The four-year, $133 million deal is largest offer sheet in league history. Phoenix has been adamant that it doesn’t intend to offer Ayton big money. But talks have slowed recently as the Suns try to architect a deal for Durant. Ayton was expected to be at the center of those talks, but this could blow that all up.

Woj then went on ESPN and said that while an offer sheet was agreed upon, it was not signed. So the Suns could still work out a sign-and-trade to recover assets for Ayton. If they do not, Phoenix has 48 hours to respond to the offer sheet or lose Ayton for nothing.

Woj says Ayton has not signed the offer sheet and an S&T is still possible, trying to figure out if he's banging on a desk to make his points pic.twitter.com/dyhyRdwl2q

Should Phoenix match, it also could no longer include Ayton in any sort of Durant trade until January 15, 2023 due to league rules. In short, the Suns are *redacted*.

Phoenix fans were not happy at all with how this played out.

Woj just said on ESPN that Ayton hasn't signed the offer sheet yet but is expected to at some point today, and he specifically said there's still time to work out a sign-and-trade.

If the Suns let him walk for nothing they are an unserious franchise and should be relegated.

My possible moods based on what the Suns next move is/how much they mess it up https://t.co/mHf4vL1swj pic.twitter.com/yYnIQ6tsvZ

Ah, so technically, the Ayton trade window is not *officially* closed yet. But obviously trending that way.

so now Indy has all the leverage lol.

either take Turner and that's it or match the offer and deal with a very awkward Ayton situation for a year.

or let him go to Indy for nothing.

so do Suns prefer getting Turner back or not. probly what it comes down to. https://t.co/Zy0xK6Z78p

If James Jones doesn’t wake up and get Turner in return to be our starting center… I’m sorry but this team ain’t doing shit with Dario/Biyombo at the middle. https://t.co/oRdgZ78Z3Z

I hope this is the route we end up going. Get something for a guy who doesn’t want to be here anymore and get KD. James Jones better figure this out or we go from contenders to average very quickly https://t.co/o8Ldfj5WZM

The tables have once again turned in Phoenix, and Suns fans aren’t enjoying the ride.